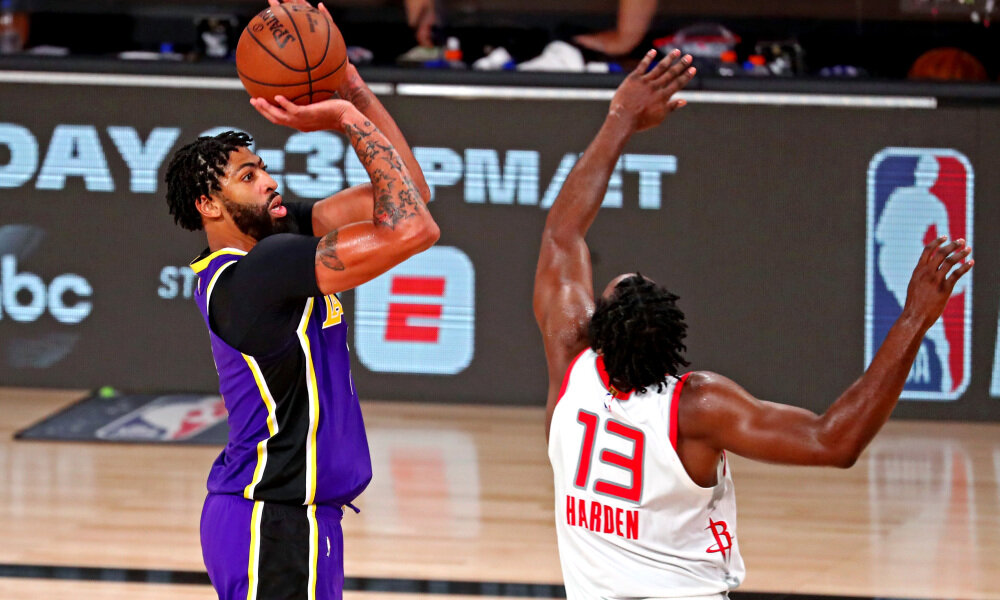 Anthony Davis poured in 29 points to power the Lakers past the Rockets in Game 4. (Photo by Kim Klement/USA TODAY Sports)

Davis tallied 29 points, 12 rebounds, 5 assists and 2 blocks in the Lakers’ pivotal 110-100 Game 4 win over the Rockets. Although he committed a team-high 5 turnovers, Davis made up for it by putting up an efficient shooting display. AD produced a 55% field goal clip, including a perfect 9-9 shooting from the free throw line.

The King was one assist shy of another triple-dub. LeBron finished with 16 points, 15 boards, 9 dimes and 2 steals as he controlled the game’s tempo, while also doing some brilliant work on the defensive end. James missed all of his five attempts from beyond the arc, but his all-around outing was more than enough for the Lakers to bag the W.

For the second game in a row, Westbrook had another productive night that resulted in a disappointing loss. The former MVP stuffed the stat sheet with his 25 points, 3 rebounds, 3 assists and 3 steals, including three hits from the three-point line. The Lakers are sagging off him all series long, but that could change if Westbrook continues to make his triples in Game 5.

Rondo has been the team’s X-factor this series as his boost off the bench has been instrumental especially when LeBron takes his rest. The veteran point guard did it all again in Game 4, finishing with 11 points, 10 rebounds, 8 assists and 2 steals, including this sweet lob to James to ice the win for the Lakeshow.

PrevPreviousPlay in Review: Did the referees miss a crucial technical foul against Nick Nurse in Game 6?
NextNuggets mount incredible comeback to force Game 6 against ClippersNext