Portland’s hot-shooting tandem of Damian Lillard and CJ McCollum will be too much for LeBron James and the Los Angeles Lakers, as the Blazers pull out a shocking upset against the Lakeshow. 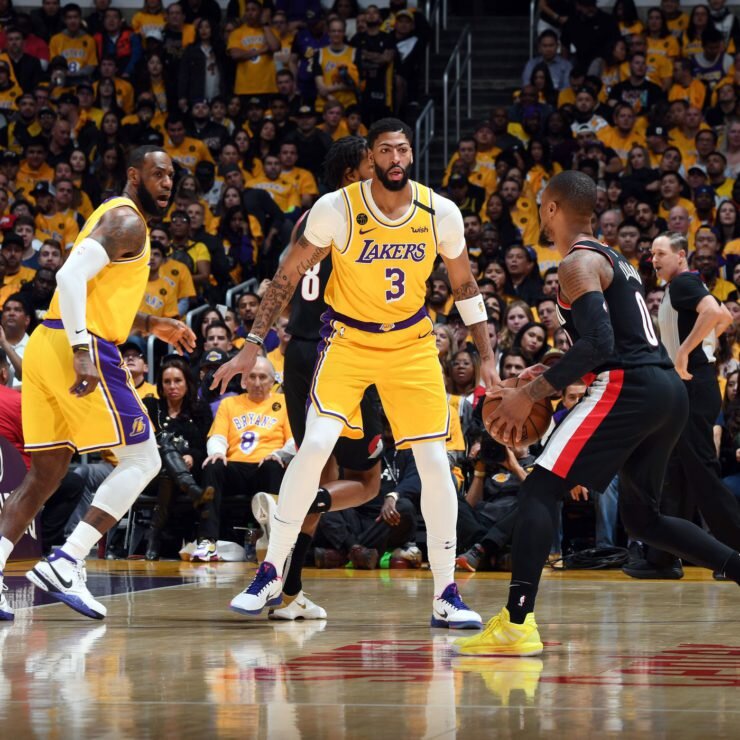 Blazers will make it rain 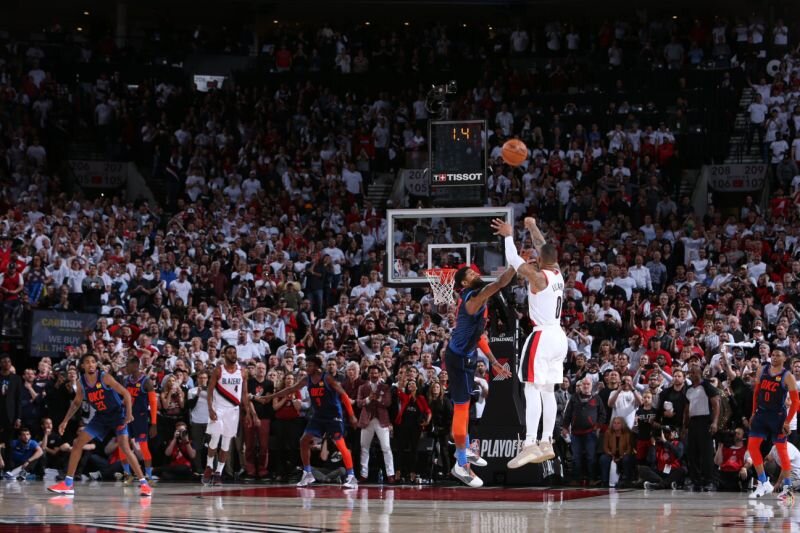 The Lakers are 1st in blocks per game averaging 6.6 blocks per contest, giving them an excellent defensive wall on the inside. Anthony Davis, Dwight Howard, and JaVale McGee anchor the rim protection for the Lakers squad, which will make it very challenging for Blazers’ big men Jusuf Nurkic, Hassan Whiteside, and Zach Collins to score from the inside. With their wide wingspan and intimidating presence, the Lakers bigs can take out the Rip City’s attacks to the rim.

The Blazers have to heavily rely on their outside shooting if they are dead serious in taking down the league’s best shot-blocking team. In their previous games, Lillard, McCollum, Gary Trent Jr., and Carmelo Anthony lit it up from the outside, helping them close out must-win games and eventually getting the 8th seed.

If the Blazers can sustain their hot-shooting performance against the Lakers, it will be easier for the 8th-seeded team to spread the floor, forcing Lakers’ bigs to challenge outside shots from Anthony and even Nurkic.

Watch out for the stars 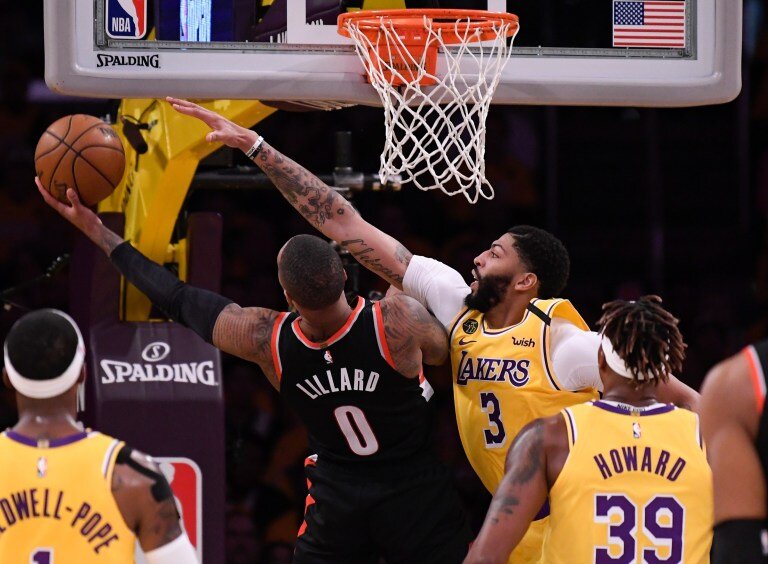 Lakers All-Star forward Davis averages 26.1 points, 9.3 rebounds, and 3.2 assists per contest, and four-time MVP James records 25.3 points, 7.8 rebounds, and 10.2 assists on a nightly basis. The two will obviously be the force for the title-hungry Lakers squad.

Containing the three-time champion James will be a difficult task for the Blazers, especially with the absence of key defender Trevor Ariza. The only player in the Blazers’ roster who can match up with James’ size is Anthony, who is not really known for having a competitive defensive skill set. Davis, on the other hand, can dominate bigger defenders with his versatility, speed, and 7’5 wingspan. Blazers will rely on the shot blocking skills of Whiteside, the size advantage of Collins, and the overall defensive presence of Nurkic to somehow contain Davis’ onslaught.

Third-year forward Kyle Kuzma will be the X-factor for the Lakers squad on the offensive end, averaging 12.3 points, 4.5 rebounds, and 1.3 assists per contest. If Kuzma will continue to complement the game of James and Davis, and accept the role of a third-option scorer, it will be a huge boost for the Lakers to win the series.

Bubble MVP Lillard averages 30 points, 4.3 rebounds, and 8 assists per outing, while his backcourt partner McCollum, who took charge in the 4th quarter in their last game against the Grizzlies to seal the 8th seed, tallies 22.2 points, 4.2 rebounds for the streaking Blazers. Portland will hope that the two streaky shooters will not wear out, and continue to blaze in the offensive end in hope of an upset against a talented Lakers squad.

The combo of Lillard and McCollum will be a bad match-up for the Lakers’ guards. With their best perimeter defender in Avery Bradley sitting out, it might be bit easier for the two Portland stars. The Lakers are expected to assign two-time champion Danny Green and 3-and-D stalwart Kentavious Caldwell-Pope to contain the two scoring machine guards. Lillard and McCollum can create their own shots in one-on-one situations, and can shoot threes, which will be very taxing for the Lakers’ designated defenders. Now, with an additional scorer in Anthony, it will be easier to delegate the focal point of Blazers’ offense. 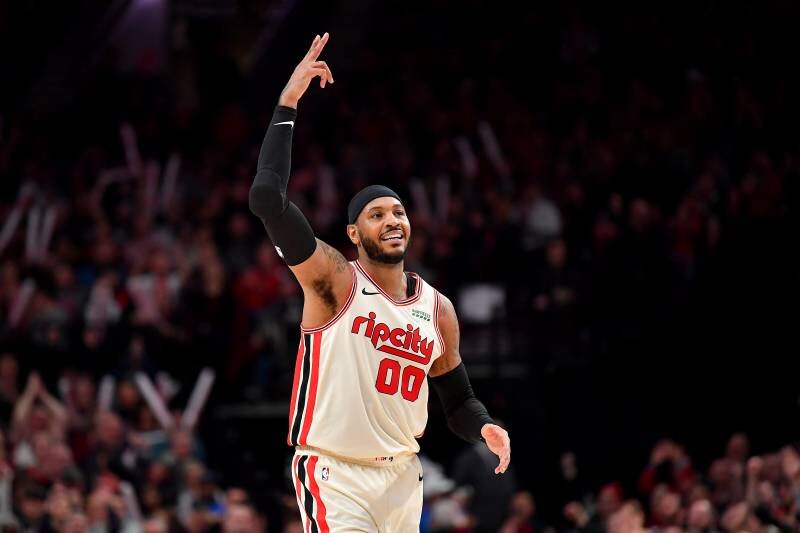 Just a season ago, a lot of fans and media people assumed that the 10-time All-Star is done and should linger into retirement. The Lakers organization did not even consider giving him a contract despite of LeBron’s hints, and signed Jared Dudley instead. Now, the 15th all-time scorer is finally back, with a new role but with the same scorer’s mentality.

The three-time Olympic gold medalist has one of the best offensive skill set in the league – he can post-up, attack the rim, shoot in the mid-range, knock down threes, and deliver in the clutch. Despite his reduced role, Anthony fits well with the Blazers team, and still averages 15.4 points, 6.3 rebounds, and 1.5 assists.

Now that he is back in the playoffs, Anthony will provide offensive support and clutch baskets to try to upset the number 1 seed.

This is a tough call, but the Blazers have what it takes to take down the Lakers. LeBron will be hard to contain in the offensive end, most especially with Anthony guarding him, but Portland can put up bodies on Davis.

Nurkic and Whiteside will play different roles of defensive tactics against the much-skilled Davis. Whiteside’s defense in solely in shot-blocking, but lacks the mobility to stay on one-on-one situations and pick-and-rolls. That is what Nurkic can actually provide. There will be defensive stops that Blazers can lean on in order to win against a team like the Lakers.

Dame and C.J will be unstoppable. They will be able to score at will even against the caliber of Green and Caldwell-Pope. With the growth of Trent Jr. and the revitalized Anthony, there will be more scoring options for the Blazers squad.

The games are projected to be close. the Blazers’ offense can back up their lack of defense, and the Lakers have enough outside shooting to match the opponent’s offense. Fans might be able to witness some overtime games and a long series, but if the game is on the line, Lillard, McCollum, and Anthony will surely deliver in the clutch.