Bam Adebayo and the Heat used a strong third quarter to rally past the Thunder, while the Knicks pulled off an upset win over Trae Young and the Hawks. 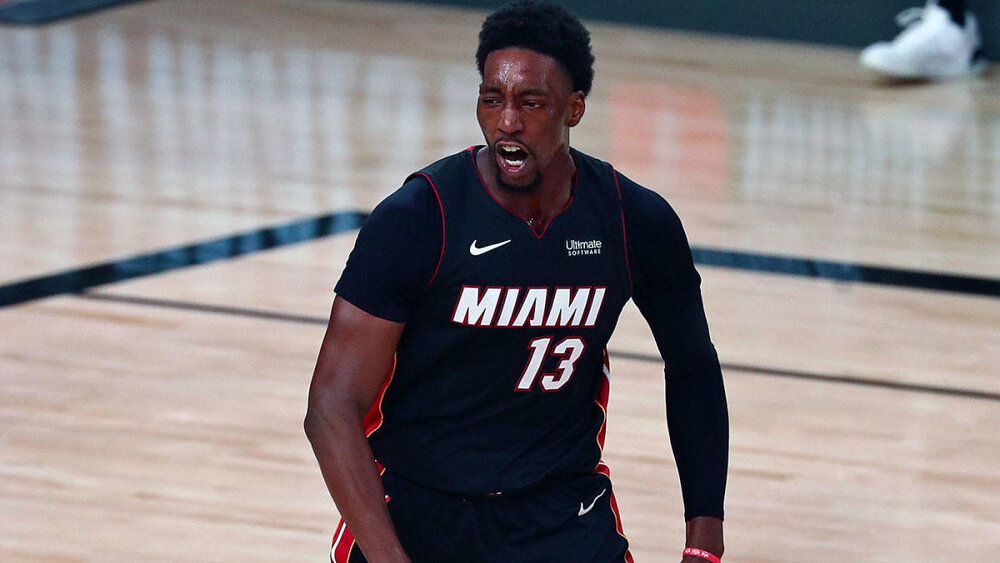 Bam Adebayo scored 20 points in the Heat’s win over the Thunder. (Photo by Kim Klement)

Behind a masterful third-quarter rally and a sound defensive stand all game long, the Miami Heat carved a resounding 118-90 victory over the Oklahoma City Thunder. Bam Adebayo led all scorers with 20 points, to go along with 8 rebounds and 4 assists in just 28 minutes of play. Kelly Olynyk chipped in 19 markers on a stellar 5-7 clip from the three-point line, and Jimmy Butler tallied 18 points and 6 assists.

After an opening period that saw the two teams tied at 26 points apiece, the Heat ran away in the second quarter. They built a 14-point lead by halftime, then expanded that advantage in the third period, where Olynyk waxed hot with his own 11-point performance in that span alone.

With this win, the Heat has now entered .500 territory with a 3-3 record to start the season.

The young New York Knicks squad continues to impress this season. Through a tremendous effort on defense in the fourth quarter, the Knicks have defeated the Atlanta Hawks, 113-108. Julius Randle again produced a massive stat line of 28 points, 17 rebounds, and 9 assists, while sophomore shooting guard RJ Barrett contributed 26 points, 11 boards, 5 dimes, and 2 steals.

After leading by two at the end of the first quarter, the Knicks then trailed the Hawks the rest of the way. But the young team showed much-needed composure as they slowly chipped away at the deficit in the second half. Rookie point guard Immanuel Quickley had another good outing off the bench, finishing with 16 points and manning the playmaking role throughout the fourth quarter.

Trae Young amassed a game-high 31 points and 14 assists for the Hawks. Atlanta has now lost their last two assignments.

Giannis Antetokounmpo continues to make his case for a third straight MVP award. The Greek Freak exploded for 43 points on a highly-efficient 70% clip from the field as the Milwaukee Bucks beat the visiting Detroit Pistons, 125-115. Antetokounmpo also added 9 rebounds and 4 assists to his name and drained two triples in the win.

The Pistons tried to mount a comeback in the payoff period, but the deficit was too much to overcome. Jerami Grant’s 24 points led the charge for the Pistons, who missed the services of star power forward Blake Griffin.