﻿The Houston Rockets stood tall against the bigger Los Angeles Lakers, earning a 112-97 victory in the Western Conference semifinals opener behind an efficient 36-point effort from James Harden and a solid defensive team effort. 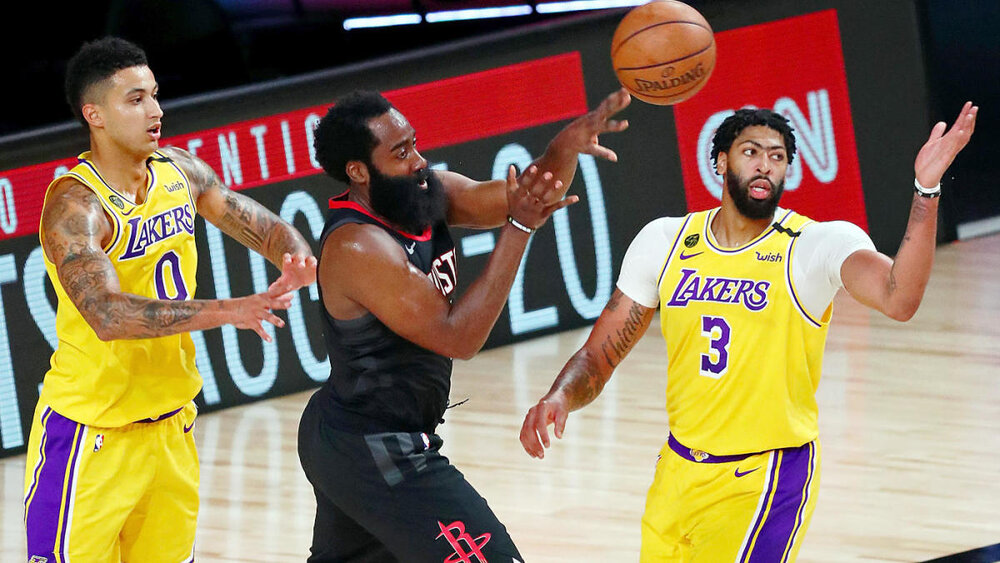 Harden led the Rockets to a Game 1 victory over the Lakers in the Western Conference Semifinals. (Photo by Kim Klement)

The 2018 NBA Most Valuable Player made 12 of his 20 field goal attempts and had five assists, atoning for his subpar offensive performance in Game 7 against the Oklahoma City Thunder. Houston also had significant contributions from Russell Westbrook and Eric Gordon. The former finished with 24 points, six rebounds, and nine assists, while the latter scored 23 points and played a crucial part in the Rockets’ huge fourth quarter run.

Los Angeles failed to maximize their size advantage over their opponents and could not contain Houston’s marquee scorers. Anthony Davis finished with 25 points, 14 rebounds, and three blocks, but settled for jumpshots despite being the tallest player on the floor. LeBron James scored 20 points, but went scoreless in the fourth quarter.

The first quarter was a back-and-forth affair despite the Rockets falling into an early 7-0 deficit. Harden was able to settle himself down after missing a few early shots, with his teammates helping keep the Lakers on their toes defensively. A Gordon 3-pointer with 5:42 left in the opening quarter gave Houston its first lead of the game, 15-14. They would continue to hold a small lead despite Los Angeles’ best efforts, ending the first quarter with a 29-28 lead.

The Rockets maintained their lead with Harden getting to the free throw line and both Austin Rivers and Robert Covington knocking down timely 3-pointers. Playing from behind, the Lakers continued to chip at the lead by playing stingy defense and establishing Davis’ rhythm in the post. Rajon Rondo, who missed the first round series versus the Portland Trailblazers, tied the game at 52 with 3:44 left in the second quarter. Sensing a shift in momentum, Harden and Westbrook took over and orchestrated an 11-3 run to end the first half with a 63-55 lead.

In the second half, the Rockets continued to answer every Laker run, with contributions from Austin Rivers and Jeff Green helping negate Los Angeles’ efforts on containing Harden. The Lakers cut the lead down to two points, 78-76 off a Kyle Kuzma 3-pointer with 2:06 remaining in the third quarter. Houston remained undeterred as a 3-point play by Rivers and two mid range shots from Westbrook gave them a 85-79 lead heading into the final quarter.

With momentum on their side, the Rockets would go on a 16-5 run in the first five minutes of the fourth quarter and take a 101-84 lead. Gordon himself outscored the Lakers 9-5, with the defense seemingly too focused on Harden and Westbrook. Davis tried to ignite one last Laker run, but his teammates could not keep up with him on offense.

Despite their size disadvantage, Houston finished with 41 rebounds, matching the output of the much taller Lakers. Los Angeles failed to capitalize on their height by surrendering 42 points in the paint compared to the 40 they scored. Their poor 3-point shooting (28.9 percent) further added to their woes even with their advantages on the fastbreak and points off turnovers.

Game 2 will be on Sunday (Monday in the Philippines), with the Lakers looking to even the series and the Rockets hoping to replicate the Miami Heat in giving the top seed some problems.