Teamwork makes the dream work as the Los Angeles Lakers used a balanced effort to pull off a 112-102 victory over the Houston Rockets in Game 3 of their Western Conference semifinal match-up. 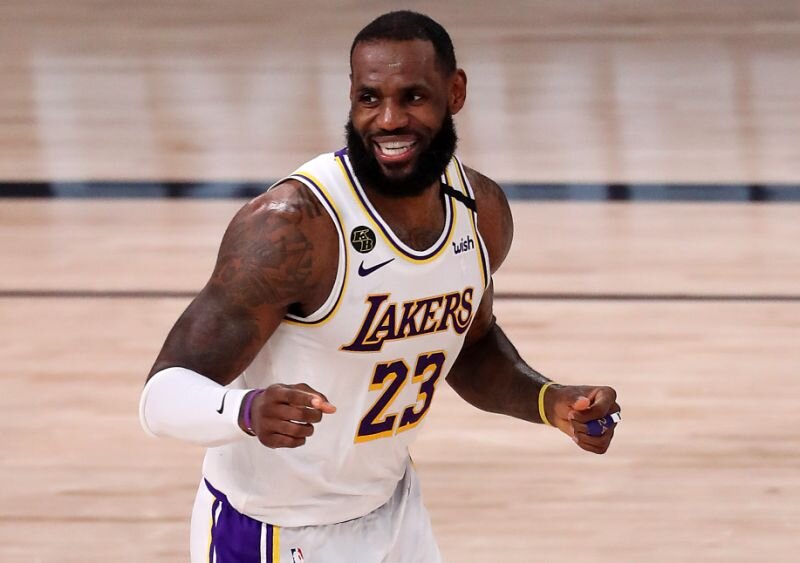 LeBron James produced 36 points to lead the Lakers to a Game 3 win over the Rockets. (Photo by Mike Ehrmann/Getty Images)

With the win, the Lakers take a 2-1 series lead in the best-of-seven series. LeBron James and Anthony Davis combined for 62 points, but it was the play of Rajon Rondo that helped give Los Angeles their second straight victory in the series.

Rondo, who missed the Lakers’ first round series against the Portland Trailblazers, scored 21 points and dished out nine assists. His 12 points and five assists in the fourth quarter helped spark the 15-5 run that put the Rockets away for good.

“[Rondo’s] been really really persistent with his work so you know when he gets his legs under him, you know what kind of gamer he is this time of the year,” Lakers head coach Frank Vogel said when asked to describe Rondo’s journey coming to the bubble. “He’s been spectacular these past two games.”

James Harden scored 33 points and was one rebound and assist short of a triple-double, but he only had two points off free throws in the fourth quarter. Russell Westbrook had 30 points, eight rebounds, and six assists in a losing effort but could not build on the momentum he had in the first three quarters.

Both teams couldn’t distance themselves from one another in the first five minutes of the game, with the Lakers’ torrid shooting and the Rockets’ points off Los Angeles’ turnovers keeping this game close. Westbrook was also making his shots early, as the Laker game plan to give him a plethora of space helped his cause.

James was aggressive early in this game, as he had 10 points by the time he was subbed out at the 5:23 mark of the first quarter. The Lakers found more contributions from other players but could not pull away due in large part to defensive slip ups. Eventually James returned after nearly four game minutes of rest to try and help close out the opening quarter well, but Westbrook’s layup with 4.1 seconds left gave the Rockets a 33-32 lead to end the first quarter.

LeBron once again took over for the Lakers in the second quarter, nearly tripling his first quarter output in an effort to give his squad the lead. However, Harden and Westbrook continued to remain aggressive on offense and did just enough to maintain the Houston lead throughout the quarter. The Lakers committed some sloppy errors and were a noticeably different team once LeBron sat down. Los Angeles’ interior defense was also absent as they let the Rockets score 32 points in the paint by halftime. Harden easily went to the basket for layups and took advantage of defensive miscues to help Houston take a 64-61 lead at halftime.

The third quarter saw a much-improved Laker squad take a 70-69 lead at the 7:12 mark off a Davis putback. Los Angeles’ defense turned up a notch and they relied on transition baskets and second chance points to edge past the Rockets. LeBron set the tone for the Lakers on defense as his two huge blocks on Harden and Eric Gordon further fueled his squad’s momentum. However, Houston would respond and get the lead back through consecutive 3-pointers by Gordon and Harden. An aggressive Davis allowed James some extended rest and with both teams continuing to trade baskets, the game was tied at 82 heading into the final quarter. LeBron ended the third quarter with four blocks, with the last one on Austin Rivers helping keep the score tied.

In the fourth quarter, Playoff Rondo was in full effect. Rondo either scored or assisted on all  but seven Laker points during the payoff period and sparked the pivotal 15-5 run that put Los Angeles ahead for good. Rondo’s impact also allowed James some extended minutes on the bench. The Lakers also relied on a revised game plan on doubling Harden during certain possessions, preventing him from anticipating double teams and forcing him to rethink his decision-making.

“I just took whatever was given,” Rondo said after the game. “It started with the defense planned for me. Guys found me when I was open and I took the shots with confidence and then I got some easy layups.”

After giving up 32 points in the paint by halftime, Los Angeles limited Houston to only 14 in the second half and finished the game with 56 interior points. Most of these points also came from the Laker bench, which contributed 42 points in a winning effort. Los Angeles also had 43 rebounds to the Rockets’ 30 and their six blocks set the tone for the second half. Houston did not miss any of their free throw attempts, while the Lakers’ free throw woes (seven misses on 23 attempts) could have hurt them if the game remained close.

“Too many 50-50 balls we didn’t get. Too many times we just weren’t sharp, we just weren’t quick to the ball or quick to a play and it got away from us,” Rockets head coach Mike D’Antoni said after the game. “But [The Lakers] hit a lot of good hard shots and tonight they got us. Next game, we’ll see what we can do.”

Los Angeles will try to take a 3-1 lead on Thursday (Friday in Manila), while Houston will look to even things up in what could be a pivotal Game 4.

PrevPreviousRon Artest: I had no choice but to play with Kobe Bryant
Next2020 NBA Playoffs: LeBron’s historic night leads top performersNext