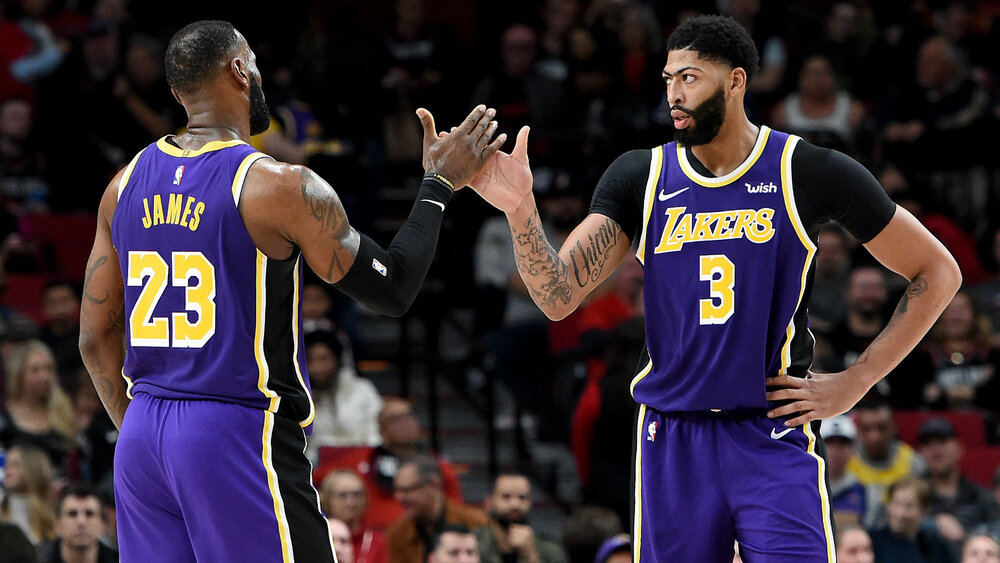 Lakers’ stars LeBron James and Anthony Davis combined for 79 points in the series clincher against Portland. (Photo from Getty Images)

The road to championship was never going to be easy for the Los Angeles Lakers but they took another step in their run to a 17th NBA championship with a 131-122 win over the gritty Portland Trail Blazers. Even with just nine players suiting up, the Blazers wouldn’t quit against the top-seeded Lakers, who needed to pull out all the stops to complete the gentleman’s sweep.

LeBron James continued to pad his lead for the all-time playoff triple doubles with an impressive 36 points, 10 rebounds, and 10 assists, while Anthony Davis led all scorers with a game-high 43 points. CJ McCollum led a valiant Portland effort with a stellar 36 points, six rebounds, and seven assists. Carmelo Anthony also turned in a vintage Melo effort with 27 points.

The Lakers and Blazers traded baskets and a share of the lead for the majority of the first quarter, with the latter overcoming the absence of Damian Lillard to take a 24-18 lead with 3:59 left in the first quarter. McCollum led Portland with 11 points and had to channel his inner Lillard to keep his squad in the game.

Davis was also saddled with foul trouble early and had to sit despite scoring 10 quick points. James had to shoulder more responsibility in the opening quarter and orchestrated a 17-7 run with consecutive three-point plays, helping the Lakers secure a 35-31 advantage at the end of the first quarter.

McCollum carried his strong play into the second quarter as his 3-pointers and smooth moves to the hoop helped give the Blazers a small lead throughout the quarter. His play spread over to his teammates as Anthony, Gary Trent Jr., and Jusuf Nurkic hit timely baskets to negate the Los Angeles runs.

However, Lakers remained relentless and their persistent efforts to attack the paint tied the game at 68 headed into halftime. LeBron was once again at the forefront of the Los Angeles offense as his 3-pointer with 0.3 seconds left in the first half evened things at the break.

The Lakers carried over their momentum into the second half as they took a 90-76 lead with less than six minutes of the third quarter on a 22-8 run. 3-pointers from James, Davis, and Kentavious Caldwell-Pope coupled with stingy defense that limited McCollum and Anthony helped Los Angeles distance themselves from Portland.

With their 3-point shots falling, the Lakers translated this effort to the defensive end. Active hands and overall pressure allowed Los Angeles to prevent Portland from scoring a field goal for nearly five minutes. The Blazers remained undeterred, going on a 16-7 run to cut the lead to five, 97-92, with less than 30 seconds to go in the third quarter. A 3-pointer from Davis (who scored 20 in the third quarter) off a James assist allowed the Lakers to extend their lead to eight, 100-92, entering the final quarter.

Portland then went on an 8-0 run to begin the fourth quarter, with Anfernee Simons’ triple tying the game at 100 at the 9:46 mark. The Lakers slowed things down and got huge shots from Caldwell-Pope and Davis, with the latter hitting a midrange jumpshot over the outstretched arms of Nurkic to hand the Lakers a 114-109 lead with 5:11 left in the game. Davis continued to make mincemeat out of the Portland defense with drives to the basket, with James putting the finishing touches on Los Angeles’ fourth straight victory in the series.

The Lakers dug themselves a hole early with careless turnovers, shoddy 3-point shooting in the first half, and unconverted second chances. Key for them in this series-clinching victory was their balanced team effort, with their 27 highlighting the ball movement that kept the short-handed Blazers on their toes.

Injury woes continued to hound Portland as Hassan Whiteside dislocated his left pinky finger with 1:50 left in the first quarter. He returned to play but was clearly bothered by the injury and foul trouble, finishing only with two points.

Los Angeles will wait for the winner of the Houston Rockets-Oklahoma City Thunder series, while Portland will see its Cinderella run in the bubble come to an end.