With their backs against the wall and down an MVP and DPOY, the Milwaukee Bucks overcame an eager Miami Heat in overtime, 118-115, to stave off elimination in the Eastern Conference semifinals. 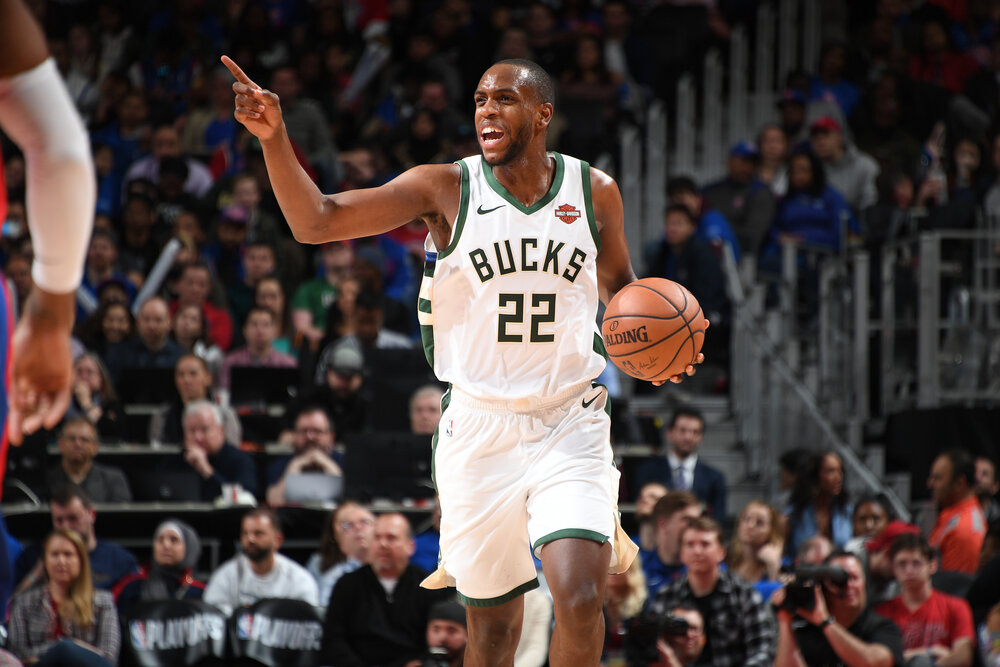 Bucks’ Khris Middleton scored 36 points in Game 4 of their semifinals match-up against the Heat. (Photo by Chris Schwegler/Getty Images)

With their backs against the wall and down an MVP and DPOY, the Milwaukee Bucks overcame an eager Miami Heat in overtime, 118-115, to stave off elimination in the Eastern Conference semifinals.

Khris Middleton, who answered the call with Giannis Antetokounmpo out after aggravating his right ankle injury, scored a game-high 36 points (nine in the extra period) despite facing the Heat’s toughest defenders. He also added eight rebounds and eight assists in 48 hard-fought minutes. Antetokounmpo, who left in the early minutes of the second quarter, put on a heroic performance as he finished with 19 points and only missed two shots.

“We knew [Antetokounmpo] was laying it all on the line for all of us,” Middleton said, adding that they returned the favor with him sidelined.

Miami was led by Bam Adebayo, who turned in a stellar performance with 26 points, 12 rebounds, and eight assists. Duncan Robinson had 20 points on six 3-pointers, while Jimmy Butler scored 17 but only had four in both the fourth quarter and overtime.

The opening quarter saw a laser-focused Heat squad race to a 10-2 lead after three minutes of play. Milwaukee was sluggish to start the game and it seemed as if Antetokounmpo was the only one who came to play. The reigning league MVP scored 14 first quarter points, more than half of his team’s output. Miami had no problems getting production from anyone on the floor as Adebayo led all Heat players with 10 points and Jae Crowder had two early 3-pointers.

Milwaukee had some solid looks but could not get anything offensively early from anyone not named Giannis. Despite the Bucks’ best efforts on both ends of the floor, the Heat responded to every run with a 3-pointer or a hard-earned basket through the lane, ending the quarter on top, 31-22.

A different Milwaukee squad came to play in the second quarter, as the team scored seven straight points to cut the deficit to two, 31-29. Antetokounmpo continued to will his team on both ends of the floor but a foot injury he suffered at the 10:18 mark of the second quarter nearly derailed his squad’s momentum. Giannis split his free throws (he was fouled on the play but his injury was not directly due to the foul) and had to leave for the locker room with his team down by a point.

The Bucks picked up the slack and continued to stay at pace with Miami, with George Hill’s consecutive 3-pointers helping Milwaukee take a 44-43 lead with 3:13 left in the second quarter. Their efforts in pushing the pace eventually allowed them to take a 50-48 lead at halftime.

With Antetokounmpo out for the remainder of the game, Middleton scored 21 points in the third quarter alone. His contested jumpshots and trips to the free throw line helped keep the game close throughout the third quarter. However, Adebayo’s relentless effort on offense and 3-pointers from Crowder and Robinson handed the lead back to Miami, 88-86, heading into the final quarter.

The Heat seemed poised to put the finishing touches in this game after they took a 100-92 lead with Goran Dragic’s layup off a pass from Robinson. Milwaukee responded by going on a 12-0 run that turned a single-digit deficit into a 104-100 lead. Miami couldn’t score for more than five minutes but Butler and Adebayo eventually tied the game at 104 with 2:25 left in regulation.

Brook Lopez would then put the Bucks ahead once again but a Tyler Herro 3-pointer swung the lead back in the Heat’s favor at 107-106 with 58.6 seconds left in the fourth quarter. Donte DiVincenzo had an opportunity to win the game in regulation after being fouled by Dragic, but he split his free throws and sent the game into overtime.

Butler opened the scoring in the extra period, but it was clearly Middleton’s moment as he shot-for-shot with whoever Miami was going with offensively. Herro’s two 3-pointers gave the Heat some slight chances but Middleton wrapped things up at the free throw line.

“That’s the great thing about Khris. He sees the court and reads it and he plays unselfishly,” Bucks head coach Mike Budenholzer said when asked about his team’s top performer, who also made key passes to big shots in certain moments of the game.

The Bucks overcame Miami’s 17 3-pointers by outrebounding them 46-41 and scoring 16 points off the Heat’s 16 turnovers. Miami surrendered 54 points in the paint and gave up 14 fastbreak points, numbers that stand out all the more considering that Giannis played only 19 minutes.

“We didn’t defend with the level of detail and effort and concentration,” Heat head coach Erik Spoelstra said after the game, adding that Middleton and the rest of the Bucks ran the offense well and got better once they got into their comfort zone.

Miami will once again look to close out the series in Game 5 on Tuesday (Wednesday in Manila), while Milwaukee will await the status of Antetokounmpo as the team looks to extend the series to six games.