Erik Spoelstra has always been an underrated coach, but Stan Van Gundy says that the Miami Heat’s stunning upset of the Milwaukee Bucks should change that perception. 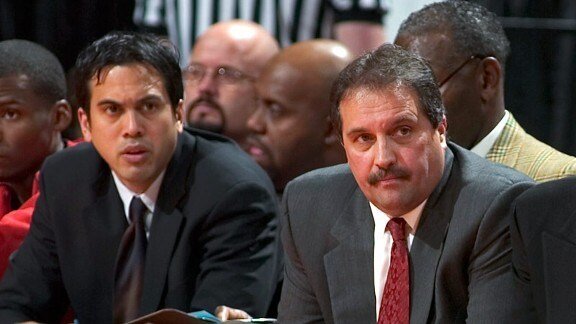 Stan Van Gundy believes that Erik Spoelstra is one of the best coaches in the NBA. (Photo from ESPN)

In the aftermath of the Heat’s shocking semifinals series win over the top-seeded Bucks, former Miami head coach Stan Van Gundy says that people should finally take notice of Erik Spoelstra’s brilliance. Spoelstra, who has been the team’s head coach since the 2008-09 season, has led the franchise to four Finals appearances, including two championships.

However, Spoelstra is still one of the most overlooked coaches in the NBA. During a recent episode of the NBA Hang Time podcast hosted by Sekou Smith, Van Gundy pointed out to the fact that LeBron James’ presence on those championship runs negated Spoelstra of any credit that he indeed deserved.

“I think Erik Spoelstra is finally starting to get his due as a coach,” Van Gundy told Smith. “When you’re coaching LeBron, you can’t never get any credit as a coach. I get it, he’s great. So Erik didn’t get his due in those days.

But I feel like he’s getting his due now for putting this together.“

Spoelstra has compiled a win-loss slate of 567 wins against 392 defeats in his coaching tenure in Miami. The 49-year old basketball tactician was also a long-time assistant coach for the Heat, and even started his NBA career as a video coordinator for the team in 1995.

But Coach Spo has grown into a calm and collected figure in the sidelines, leading the Heat to nine playoff appearances in his 12 years with the team. Spoelstra will again have the opportunity to solidify his legacy as the Heat is now one series away from returning to the NBA Finals.

PrevPreviousNuggets mount incredible comeback to force Game 6 against Clippers
NextTatum, Celtics hang on to eliminate the defending champs in Game 7Next