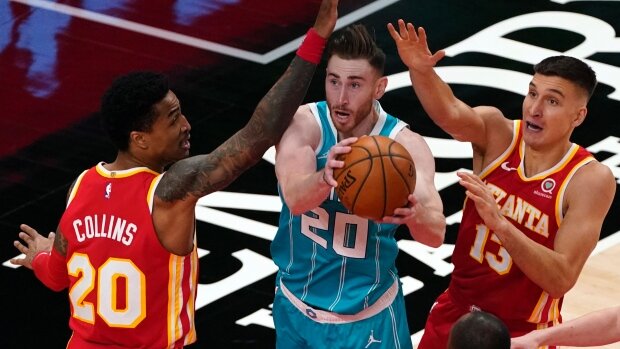 Hayward had 44 points in the Hornets’ win over the Hawks. (Photo via The Canadian Press)

Hayward explodes for a career-high 44 points

Behind the exploits of Gordon Hayward, the Charlotte Hornets put a stop to their three-game losing skid as they defeated the Atlanta Hawks, 102-94. Hayward, who the Hornets just acquired last offseason, produced 44 markers on a highly-efficient 60% clip from the field. He drained four three-pointers, pulled down seven rebounds and committed only one turnover the whole game.

John Collins led the Hawks with a double-double outing of 23 points and 11 boards, but their main star Trae Young struggled mightily in the loss. Young only tallied seven points, made only two of his nine shots, and had seven turnovers.

With this disappointing loss, the Hawks have now absorbed their third straight defeat.

The Philadelphia 76ers are now riding a five-game winning streak. The Eastern Conference frontrunners hacked out a 141-136 victory over Bradley Beal and the Washington Wizards. Joel Embiid topscored for the Sixers with his 38 markers, while Seth Curry chipped in 28 points on a solid 6-7 clip from the three-point line.

It was a disappointing loss for the Wizards, especially with Beal waxing hot with his eye-popping 60-point night. The Wizards trailed the Sixers entering the fourth quarter, but was able to mount a comeback late in regulation. However, they weren’t able to hit their stride on offense in the clutch as they dropped to a 2-6 record in the East.

The New York Knicks relied on the fourth-quarter heroics of Austin Rivers as they pulled off the upset on the Utah Jazz via a hard-earned 112-100 victory. Rivers came off the bench to produce 23 points, including consecutive buckets in the payoff period that sealed the Knicks’ third straight win.

The Jazz led by twelve by the end of the first half, but collapsed in the final two quarters. Their offense sputtered in the third quarter, while also giving up 34 points to the Knicks during that span.

Knicks’ combo big man Julius Randle, who is putting up an MVP-worthy season, finished with a game-high 30 points and added 16 rebounds and 7 assists.