On Feel-out Games & 0-1 Deficits: The Lakers can’t afford any let-ups against the Nuggets

The Los Angeles Lakers are rolling in the 2020 NBA Playoffs and have only lost twice in that span, yet they have the vibe of a diesel engine. 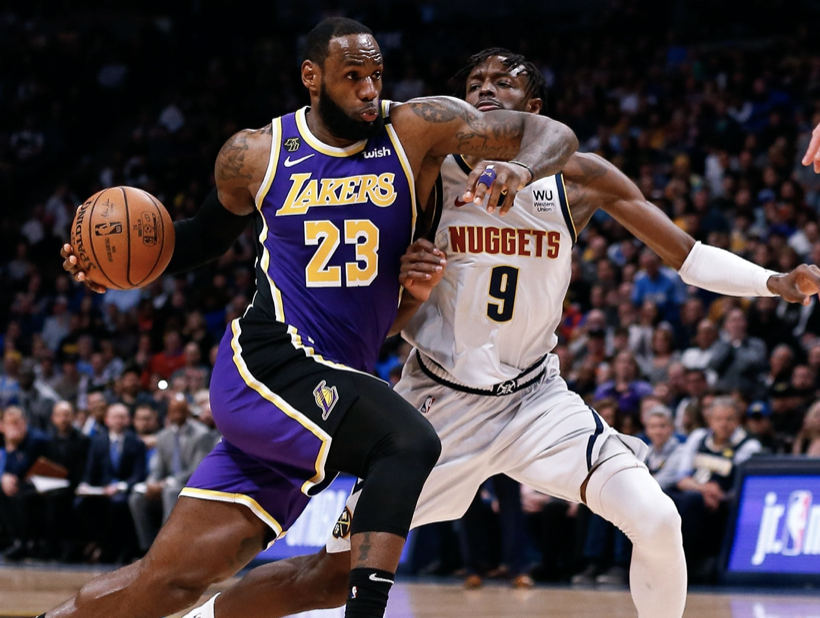 Lakers star LeBron James’ brilliance will again be in full display against the Nuggets. (Photo via Bleacher Report)

While five of their eight wins were by double digits, four of those came after Game 2. Their past two playoff series against the Portland Trail Blazers and the Houston Rockets have seen them drop the opening games before putting the pieces together and completing the gentleman’s sweep in convincing fashion.

The Western Conference Finals may be another series in the Lakers’ quest for their 17th NBA title, but what worked in the previous two matchups may not fare well against the Denver Nuggets, who have weathered every storm they’ve faced so far this postseason.

Los Angeles will be well-rested but having not played in a week may have effects on their game conditioning. To offset that, crafting a strategic game plan like the way they trapped James Harden and got the ball off Damian Lillard’s hands will prove to be the difference maker in this series.

In hindsight, it may seem that Los Angeles used both Game 1s against the Blazers and the Rockets to assess their opponents’ best punches and develop a game plan in response. This may have worked in those earlier matchups, but there may be no need for that since the Nuggets have played 14 games and have provided more than enough scouting material.

It may be part of the Lakers’ strategy not to play their best hand from the onset, but Frank Vogel and the rest of the coaching staff must go deep into their arsenal of schemes to contain the offensive versatility of Nikola Jokic and the firepower of Jamal Murray.

Don’t let Denver’s struggles and initial status as the third seed fool you; the road to the championship won’t get any easier for the Lakers. Murray had his way around the defenses of the Clippers and the Utah Jazz, with his two 50-point performances coming against the latter. Jokic is one of the craftiest big men in the league and his elite passing has required teams to adjust their defenses accordingly.

Lost in the luster of both Jokic and Murray are the x-factors in Michael Porter Jr. and Gary Harris. Porter Jr. was known more for his scoring and at times defensive liabilities, but he rose to the occasion in Game 7 against the Clippers with his rebounding allowing the Nuggets to push the pace and get shots on the other end. Harris has been mildly inconsistent in the bubble, as he struggled with injuries and getting back into the rotation. All his efforts came into fruition in Games 6 and 7 as he scored in double figures and offset the offensive struggles of Porter Jr.

While both teams played against one another back on August 10, the rotations are now different and the stakes are much higher for both teams. Nevertheless, the game had its highlights and tense moments, with Kyle Kuzma’s go-ahead 3-pointer sealing the win for Los Angeles.

Los Angeles has shown that they are capable of adjusting to the situations they face on both ends of the floor. Apart from trapping Harden in the last series, the Laker defense let Westbrook get his shots, while also adding Markieff Morris to the starting lineup. The results were an analytical gem:

NBA's No. 1 playoff lineup by plus/minus is the Lakers' usual starting five (LeBron, KCP, Danny, AD, JaVale), which is +39 in 89 minutes.

NBA's No. 2 playoff lineup by plus/minus is the Lakers' new starting five (LeBron, KCP, Danny, Markieff, AD), which is +30 in 30 minutes.

Lakers head coach Frank Vogel and the rest of the coaching staff have been meticulous in developing gameplans and the buy-in they get from the team makes teaching the nuances much easier.

The Los Angeles Clippers’ demise in Game 7 against the Nuggets was a lesson in complacency, especially with the squad earning preconceived notions that they have the vibe of champions even if they never won one together. Unlike their neighbors, the Lakers were never disrespectful to the competition, going only as far as saying they’re built differently (and proving it on the court).

The last time the Lakers and Nuggets squared off was in 2009, when a Kobe Bryant-led Lakers squad took down Denver in six games. It will also be a second go-round for JR Smith, who was with the Nuggets back in 2009.

With the Clippers and the Milwaukee Bucks out of the bubble, the Lakers are in prime position to clinch their 17th NBA championship. They’ve been able to shut down critics with their improving play with each passing playoff game, proving to everyone watching that they’re legitimate contenders rather than brash pretenders. Against a gritty Nuggets squad, they’ll have to strike fast and strike hard because these playoffs have shown that there’s no mercy even for the top seeds.