Eros Villanueva on Being a Sports Journalist Amidst Pressing Social Issues

Dribble Media’s Paul Tamayo sat down with ESPN5 writer Eros Villanueva to talk about the latter’s sports writing journey, and his belief that it’s also his responsibility to be a beacon of truth amidst the pressing social issues in the country. 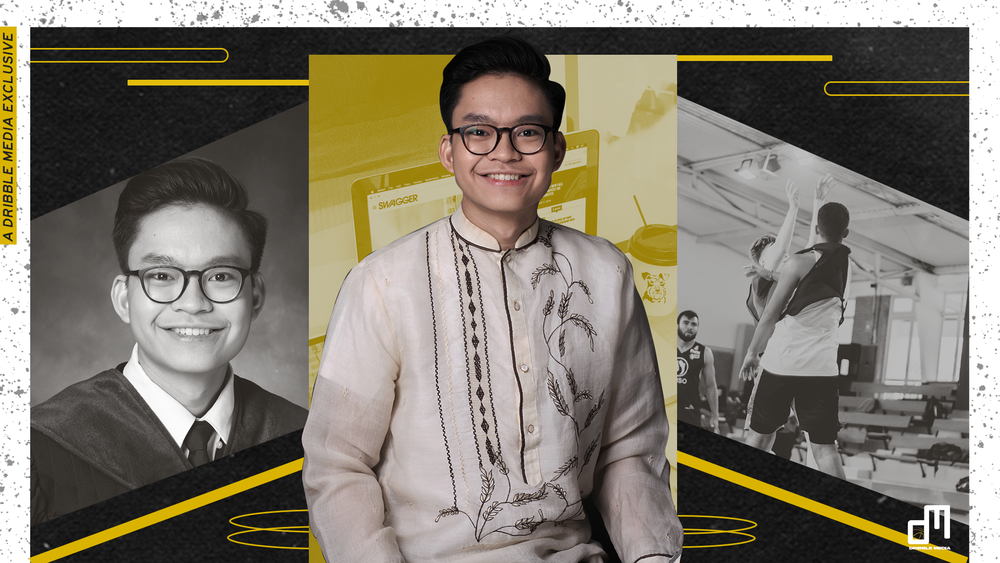 After serving as the Editor for Fox Sports Philippines, Eros Villanueva is now a writer for ESPN5.

Ignorance should never be a part of any person’s vocabulary, especially during these tumultuous times. We are seeing people becoming more vigilant, a much-needed attribute to have in today’s trend of fake news and colourful words to hide the ridiculous issues in the country.

Such is also the case for journalists, who serve as the society’s frontliners in delivering substantial and incorruptible information to the people. Eros Villanueva, a writer for ESPN5, knows that his work as a scribe is not only limited to sports. His job may be focused on bringing in news developments to the sports community, but he believes that it’s still his responsibility as a journalist to stay afloat of social issues.

Eros has always been a strong follower of sports, but a career in sportswriting just happened along the way for him. During his college days at the University of Santo Tomas (UST), Eros ventured into the world of sports journalism when he was looking for an internship.

Eros: Back when I was looking for an internship in college, I got into Sports Illustrated. Someone informed me that most of the editors there are also from UST. So I paid a visit and was fortunately accepted. For a couple of months, I was covering games and doing interviews with sports personalities. Kahit noong nag-resume na ang classes ko, I was still covering for SI as an associate.

Still, Eros wasn’t completely sold on the idea of a sportswriting career. He even went to law school for one semester, but conversations with his friend Philip Matel eventually encouraged him to make up his mind.

Eros: Me and Philip would always talk on a daily basis. He would talk about having the time of his life covering the UAAP and NCAA. Back then, I already felt that I could also do it. I wanted to do what he was already doing. Eventually, I made up my mind and fully ventured into sports. I was hired by Fox Sports Philippines, then ayun tuloy-tuloy na siya.

Eros became the editor of Fox Sports PH, a stint in which he would learn all about the ups and downs of the sportswriting industry. He also reiterated the essence of having mentors, who will not only share their experience with you, but will also motivate you to become a better version of yourself.

Eros: It doesn’t matter how good you are at what you do, you will still need help along the way. I’m fortunate to be blessed with mentors who encouraged me to continue what I’m doing. Tina Maralit, who now works at the Daily Tribune, was my mentor from Sports Illustrated. She is very fierce and she has a strong personality. She really motivated me to be more outgoing and not to be afraid to chase stories and talk to personalities. It’s because you won’t get to where you want to be if you don’t make the first move.

Then si kuya Christian Jacinto. He was also in SI when I was there, then he moved to Spin.ph. Sobrang dikit kami in a sense na I can approach him about anything related to sports or hindi, lalo na at that time when I was struggling with internal issues at Fox Sports. He would always listen to me talk about these problems and how to navigate through all that.

Now that he is with ESPN5, Eros says that he is happy to learn from the best sports scribes in the country, citing the names of his current assistant managing editor JC Ansis, and also his managing editor, Sid Ventura. Eros would also emphasize that the job also comes with the pressure of representing ESPN’s brand, as well as his personal challenge of becoming a better writer.

Eros: There will always be some kind of pressure. Of course, you’re representing the brand so you have to be at the top of your game. But at the end of the day, it’s all about producing the best that you can produce for the company and for yourself. It’s not just the pressure to represent the brand, but the pressure to be better everyday.

Compared to the more seasoned and more popular journalists in the country, Eros is still relatively new to the industry. He doesn’t have that much of a following just yet, but that does not stop him from being vocal with his own fight against social injustice. 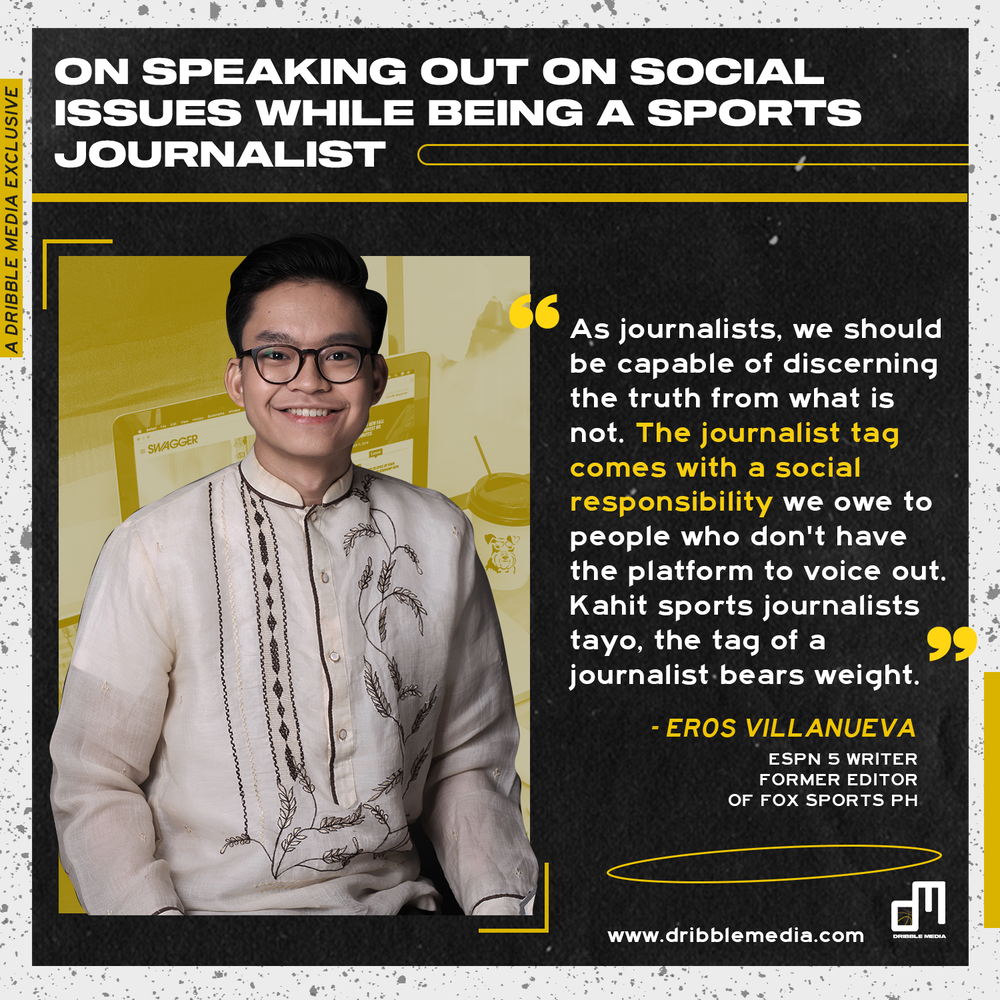 With social media platforms brimming with fake news and misleading information, Eros believes that people expect journalists like him to be their light and guide.

Eros: It’s important to be vocal because there is a domino effect. When you speak out, you will find people who are in the same boat as you, who want to be on the same side of justice. As journalists, we should be capable of engaging and discerning the truth from what is not. With people gravitating towards you, they expect you to be a beacon of truth and information.

And even though you are not very loud with your opinions on social media, if you do your part of educating people even privately or in your own little ways, it goes a long way.

To wrap up the conversation, Eros said that being a sports journalist will not force him to shy away from speaking out on the issues that concern the society. He makes it a point to view it as his responsibility to provide a voice for the people in our community who don’t have one.

﻿Eros: It’s more of a social responsibility because we owe it to the people who don’t have a voice. You uphold social justice, the truth, and the rights of these people. You lift them up. Kaya kahit sports journalists tayo, the tag of a journalist should bear weight.

PrevPreviousMiguel Plata: On hurdling challenges and preparing for life after basketball
NextJearzy Ganade: On battling stereotyping and finding success as a female student-athleteNext