Home » Exclusives » Eugene Tejada: Recovering from a Tragic Injury and Moving Forward with a Healthier Mindset

Eugene Tejada: Recovering from a Tragic Injury and Moving Forward with a Healthier Mindset

Former PBA player Eugene Tejada sat down with Dribble Media’s ZerJosh Serrano to talk about his newly-published book, “Ready to Rise: One Man’s Journey from Paralysis to Liberation”, and how his faith helped him to move forward from a career-ending injury. 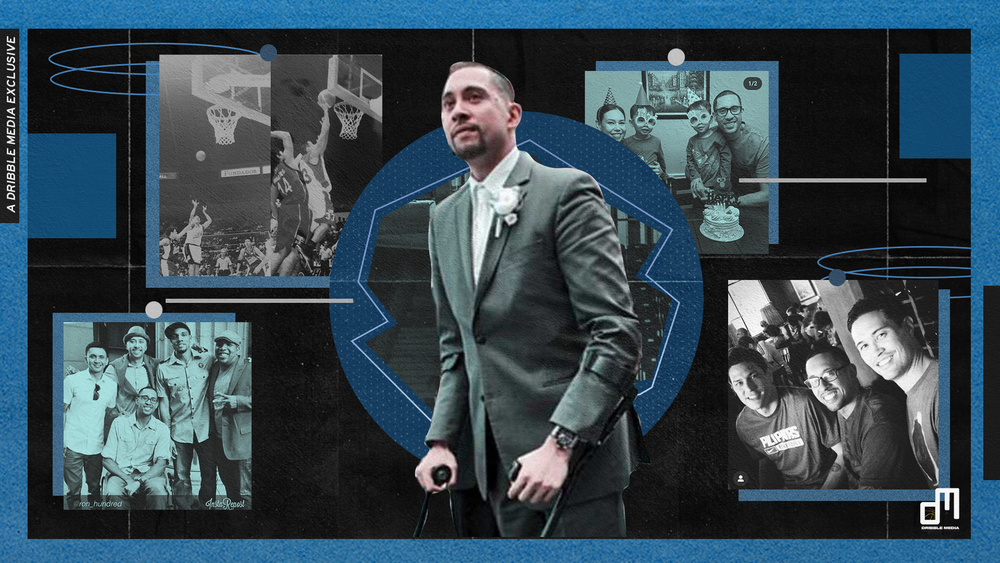 Eugene Tejada was young budding star in the PBA before his career abruptly ended with an injury.

Health is the top investment in sports, and every professional athlete spends a significant amount of his fortune to take care of his body. LeBron James, whose peak performance hasn’t declined even in the age of 35, reportedly spends a whopping 1.5 million dollars every year just to get his body in optimum shape.

Obviously, the risk of an injury is something that athletes face everyday. There’s just no getting around it. If they get hurt, they just have to recover, bounce back, and play again.

But for Eugene Tejada and the injury that ended his blossoming PBA career in 2006, the only next step is to recover. Tejada was suiting up for the storied Purefoods franchise back then, and was slowly becoming a household name.

During a game against Red Bull in May 2006, his teammate Roger Yap drove down the lane, got fouled on a lay-up attempt, and fell to the floor. Tejada, who always had a nose for rebounds, went up for the offensive board but lost control of his footing and also fell to the ground.

The domino effect would ensue as the 6’9 Mick Pennisi, who was playing for Red Bull at that time, also lost his balance and landed on Tejada’s back. Tejada suffered a dislocation on his spinal cord, leaving his legs immediately paralyzed, and his basketball career in the dark.

14 years after that horrible incident, the former Purefoods forward sat down with Dribble Media to talk about how he moved forward from what he described as the worst injury in PBA history.

“I think if there’s a measure, I had the worst injury in PBA history. I never broke a bone in my body, never had an ACL, and the first thing I ever broke was my neck.”

Selected 15th overall during the 2003 draft, Tejada mostly sat on the bench during his first two years in the league. He went from playing for Alaska to San Miguel, but would see sparse playing time.

It was when he joined Purefoods that he finally found his value as a basketball player.

“I didn’t play much and I didn’t know my worth as a basketball player during my stints with Alaska and San Miguel. I never had any playing time and it took a hit on my ego. What really hurt me the most was that the injury happened when I was starting to play great for Purefoods, and I was one of the top players of the team.” 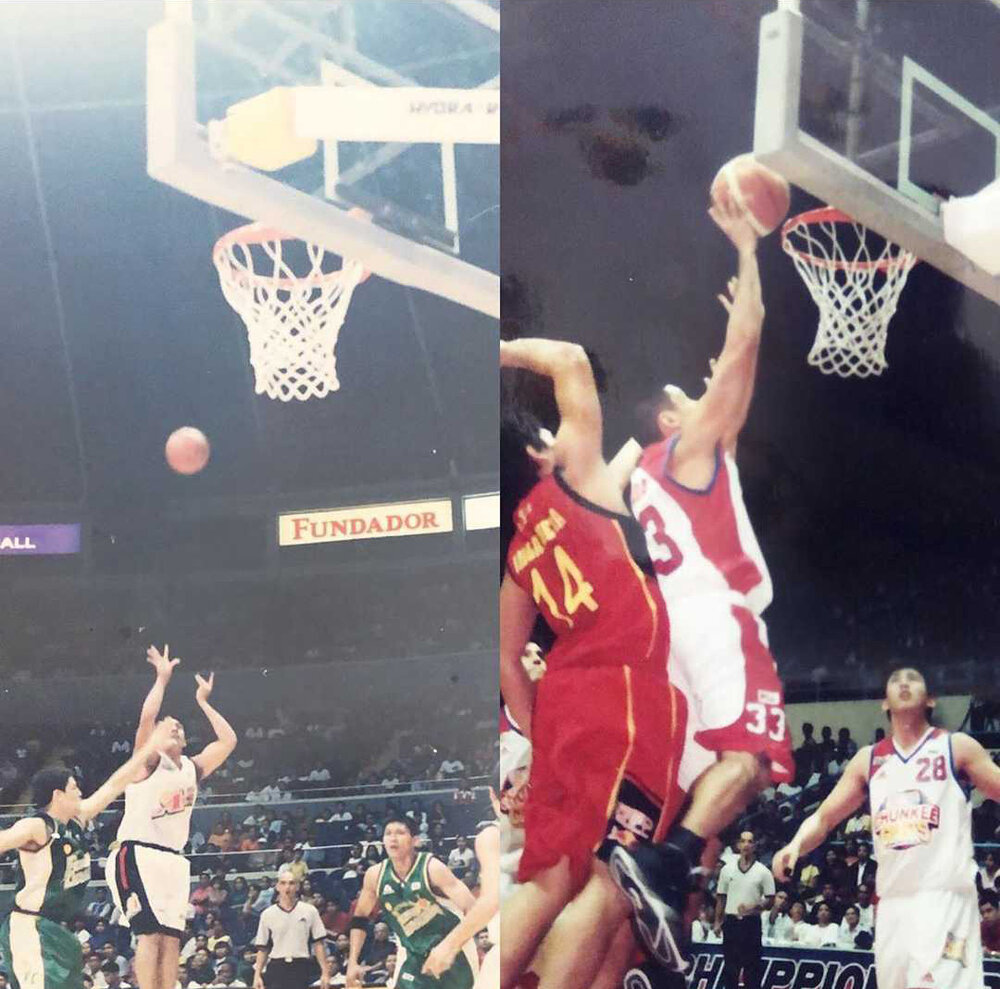 Old photos of Tejada during his playing days with Alaska and Purefoods.

That Purefoods squad was indeed a powerhouse group. Stars James Yap and Kerby Raymundo were at the peak of their physical abilities, and they were complete from the guards to the big men. Tejada and Marc Pingris backed each other up in the frontcourt, while (Roger) Yap and Paul Artadi manned the backcourt.

But the most painful circumstances in our lives happen when we least expect them. As soon as his body felt the full force of the free-falling Pennisi, Tejada knew that his rising basketball career was headed down the cliff.

“The only thing I could move at that time was my eyeballs. I couldn’t feel a thing from the neck down. The tears wasn’t because I’m in pain, but because I knew I may never play basketball again. I was up for the Most Improved Player of the Year award that season, and all of it was taken away.”

Tejada’s basketball career wasn’t just something that he did for a living. It was his life. Basketball became his identity, and the injury stripped him of everything he worked hard for.

“My identity was taken away. My whole life, I was known as a basketball player. Growing up, I didn’t really pursue anything because I learned I was dyslexic and that I had ADHD so I cannot focus too well. So I put every ounce of my energy in basketball. And once it was stripped away, I had to do an emotional healing from the inside out.” 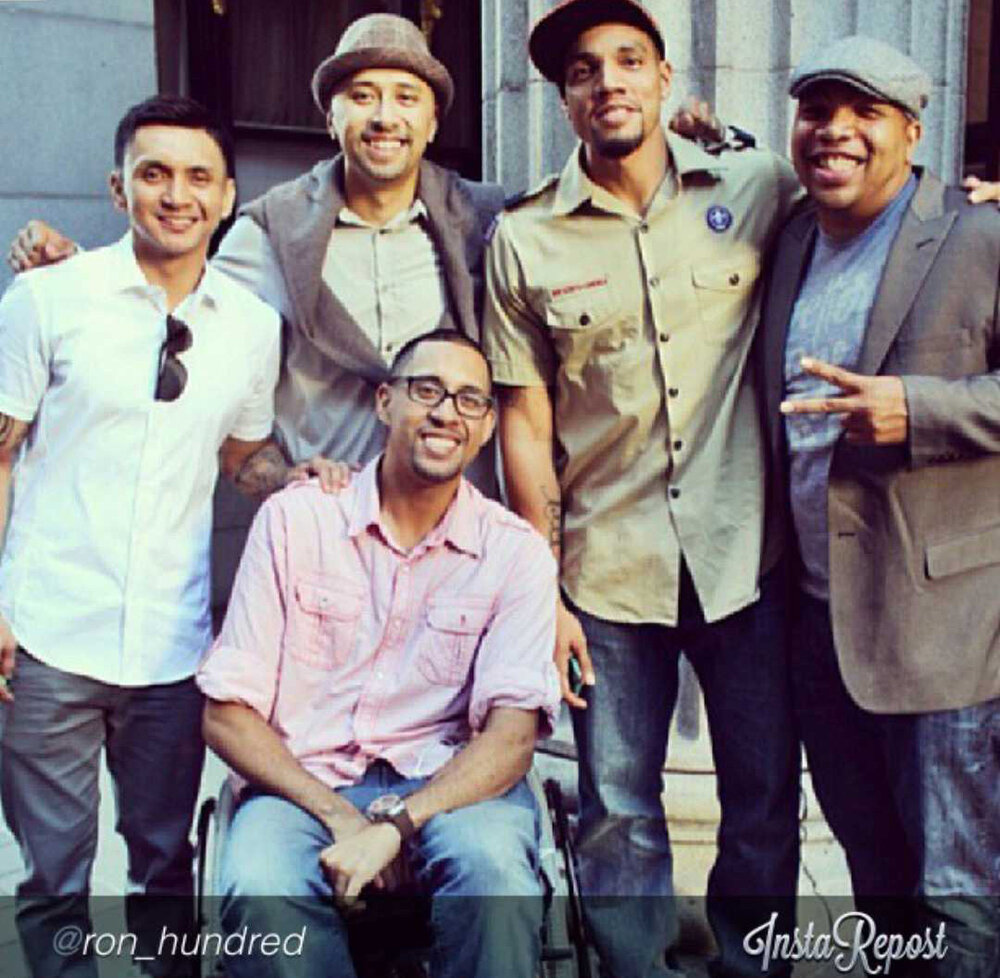 Life was never the same for Tejada, but the friends he made throughout his basketball career stayed by his side.

But moving forward from that tragic injury didn’t come quickly. During the hospital ride from Ynares Center to Makati Medical Center where Tejada was treated, he confessed that he was very close to letting go.

He was vomiting throughout the ambulance ride, and he felt that his life was coming to an abrupt end.

“I really thought I was going to die. People don’t realize that everything turned off, including my lungs, my hands and my breathing. It’s like someone turned off the switch. I couldn’t breathe and I was starting to choke on my vomit because I don’t have the lung capacity to spit it out. So I started thinking, ‘Am I going to die here? This can’t be it.’”

Even after he survived that unfortunate night, the emotional depression became unbearable. For years, Tejada was only going through the motions of his physical rehabilitation, but what he felt inside became intolerable.

For the million hoopers all over the world, basketball is their safe haven. That was also the case for Tejada. Before the injury, his escape rope from emotional problems was basketball.

So as he lived life with basketball drifting away from his rearview mirror, he confessed that it was a transformational process that took him almost twelve years.

“It took me until Year 12 (after the injury) to finally deal with my emotions. Yes, everything was healing physically, but emotionally I was still a mess. I sat and played the victim role and didn’t really pursue anything because I don’t feel like I’m enough. Thoughts of taking my own life entered my mind, and I almost tried. It’s easy for me to kill myself and be gone, but I couldn’t bear the pain that I would’ve caused to my family and friends. I didn’t give up because everyone doesn’t want me to.” 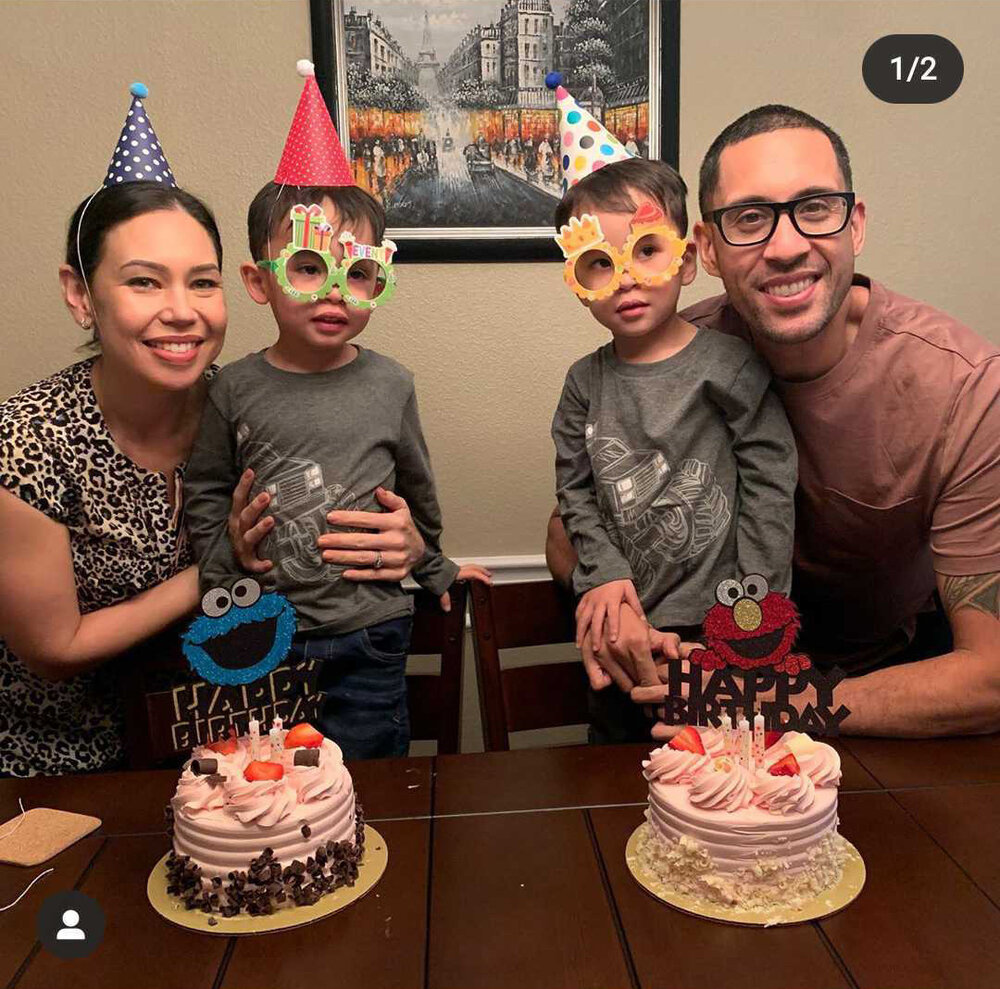 Tejada would eventually find the inner strength to start moving forward. It’s still an on-going process, and his wife and twins provide him refuge and encouragement.

The turning point of his road to full recovery was when he found his faith in the Lord. At that point, Tejada was already desperate to get some kind of healing. It was during one meditation session with a clairvoyant that a vision led him to open his Bible and transform his life through his faith.

“I didn’t look for Jesus. He found me. I was doing a meditation session with a clairvoyant back then when a voice suddenly told me, “I’m the one healing you.” I believed it was God, and I opened up my Bible and stumbled upon Matthew 9. That can’t be a coincidence because the first time I opened my Bible, it’s about Jesus healing a paralytic. I realized that once I let God in and once I submit, He opened up doors and gave me true freedom like I’ve never ever known.”

It was also his newfound faith in Jesus that helped him draw the strength and willingness to patch things up with the person who unintentionally or not, took away his basketball career.

Pennisi, a long-time PBA veteran and national team mainstay, was known as an enforcer during his playing days. Tejada didn’t know what Pennisi’s true intentions were in that incident, but he admits that the latter’s image as a very physical player brought hatred and contempt to his heart.

“He (Pennisi) stripped everything away from me – my livelihood, my career, my health, and even my relationships. I was angry because we all know that Mick is an enforcer and was known to be quite the dirty player. I never really forgave him until such time when I was having dinner with Tony Dela Cruz and Brandon Cablay. Tony and Mick were both coming off stints with the national team. He (Tony) told me a story in which they were riding the bus in the US during training, and Kerby (Raymundo) asked Mick why he did that to me. Mick said that he didn’t mean it and that he didn’t even know that I was there (on the floor). ”

Dela Cruz would also ask Tejada if he was willing to talk to Pennisi. Tejada agreed and he straight up asked Pennisi if he fell on purpose. The former Red Bull center said no, and that was it. It’s now water under the bridge. 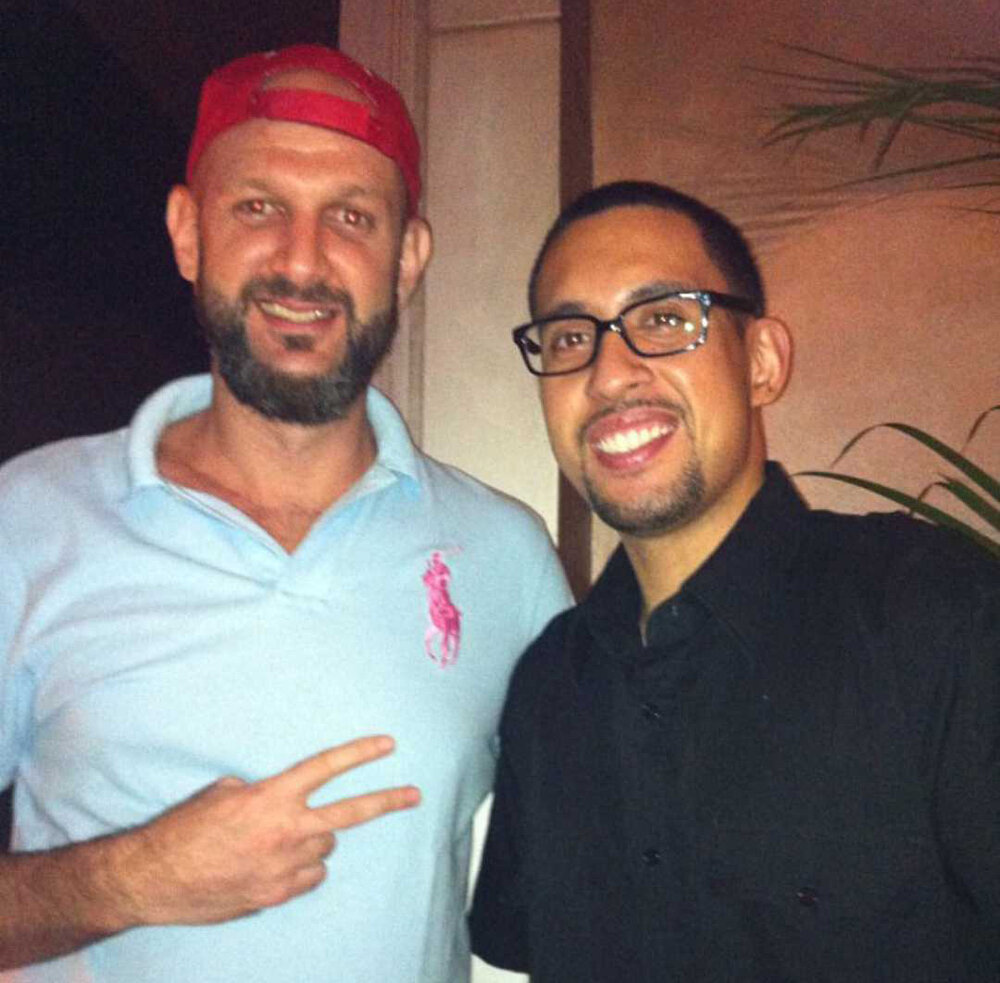 Years after the unfortunate incident, Tejada and Pennisi found a way to personally talk to each other.

Tejada didn’t just forgive Pennisi, but he also felt some kind of compassion. After all, Pennisi became the recipient of lashings and criticisms from fans who, until now, think that the lefty big man injured Tejada on purpose.

“Everyone was focused on me and looked at me as the victim. But Mick was also a victim. He had to carry this burden of potentially almost killing this guy and taking away everything from him. Imagine that kind of guilt. It’s like being a murderer and living your life knowing you almost killed someone. I didn’t forgive him right away, but I realized that I can’t be a prisoner of hatred. If Jesus forgave me for all I did, I had to forgive him as well.”

With his playing career already in the past, Tejada is now a motivational speaker and an author. His recently-published book entitled, Ready to Rise: One Man’s Journey from Paralysis to Liberation, is now available on Amazon. The book doesn’t just chronicle his recovery from a disastrous physical injury, but it also reveals how Tejada overcame the “emotional paralysis” he went through.

“The book is about realizing that many times in our lives, we’re living in a paralyzed state. We’re paralyzed of fear, paralyzed of anxiety of our future, or paralyzed by our past. I just want to lead people to go on a journey where I help them examine themselves and have that starting point towards full recovery.”

If you want to dive in deeper to Tejada’s inspiring story, you can purchase a digital copy of his newly-published book, “Ready to Rise: One Man’s Journey from Paralysis to Liberation,“ through this Amazon link. You can also visit the book’s official page on Facebook and check for new updates.

PrevPreviousJearzy Ganade: On battling stereotyping and finding success as a female student-athlete
NextTin Catacutan: Being aware of your physical and mental health while working from homeNext