Jed Mendoza: On How Basketball Fulfilled His Family’s Dreams

Dribble Media’s ZerJosh Serrano talked to former collegiate basketball star Jed Mendoza about his mixed emotions on being picked last in the 2021 PBA Draft, along with the fact that he just fulfilled his family’s dreams. 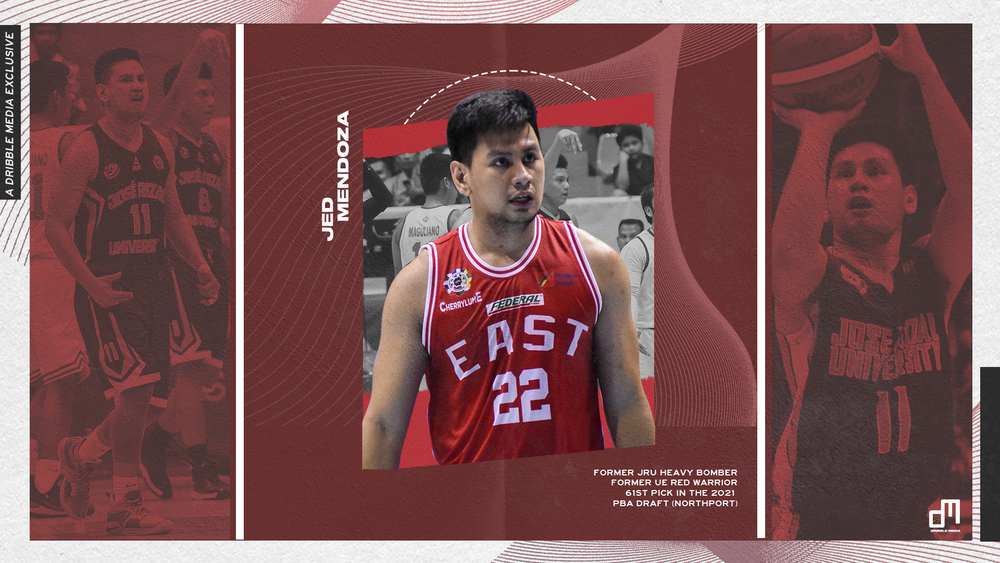 Jed Mendoza was only 11 years of age when he started dreaming of playing in the PBA.

And no, it wasn’t just his dream. It was the dream of his whole family.

Influenced by his father and his two brothers, Jed’s love for the game of basketball blossomed into a serious goal of being a PBA player someday. But he was not alone in that pursuit. His father and his siblings all wanted to play basketball at the highest level.

So they pushed and helped each other improve, and eventually it paid dividends when Jed was selected in the recently-concluded PBA Draft.

Before he was selected in the draft, Jed was a star in the collegiate ranks for a long time. He was one of the few collegiate players in Filipino basketball history to play both in the NCAA and in the UAAP.

Jed was a star in the NCAA as he played a main man role for the JRU Heavy Bombers. After he graduated from JRU, Jed took advantage of UAAP’s “done-and-one” rule to further hone his skills as preparation for his inevitable jump to the pros. 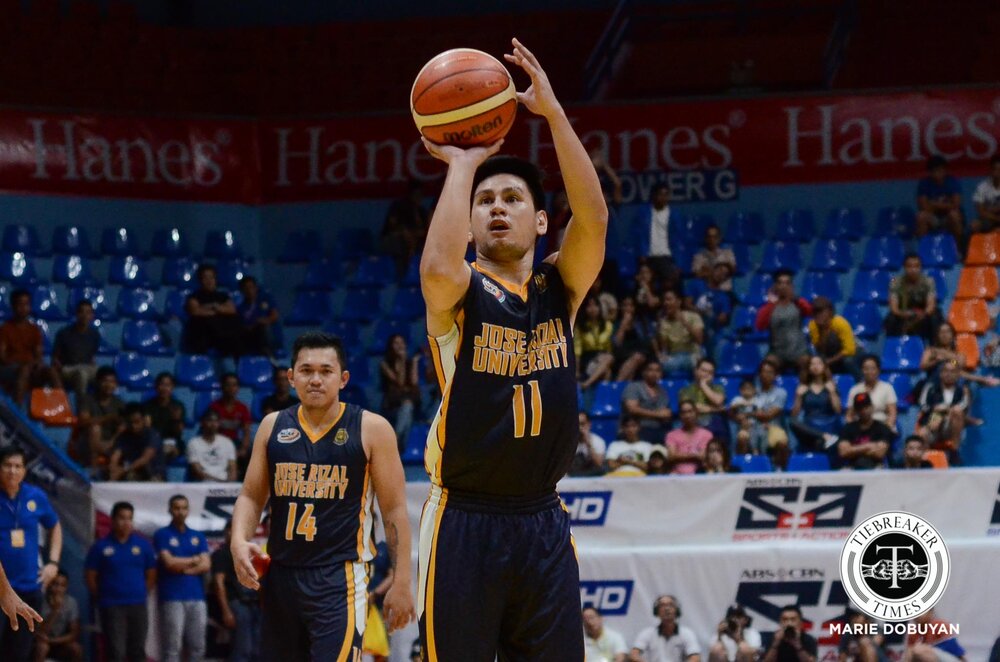 Jed served as one of JRU’s backcourt stars in the NCAA. (Photo by Marie Dobuyan/Tiebreaker Times)

He revealed that three UAAP schools reached out to him, but a number of personal reasons eventually led him to the doorsteps of the University of the East Red Warriors.

May tatlong UAAP teams na tumawag sa akin to express their interest in recruiting me. Nauna tumawag yung UST, then UE, at pang-huli yung Adamson. Due to personal reasons, I decided that playing for UE would be a better choice for me.”

Since it is rare for a college player to play both in the NCAA and in the UAAP, it’s only natural for us to ask Jed about the difference between the two popular leagues. The most common take out there is that basketball is more competitive in UAAP.

But Jed begs to differ.

Throughout the several years that he played in the collegiate ranks, Jed admits that he has battled with and against many players who are more skilled than him. This challenge forced him to lean on honing two assets that he deems to be of utmost importance: Discipline and Attitude. 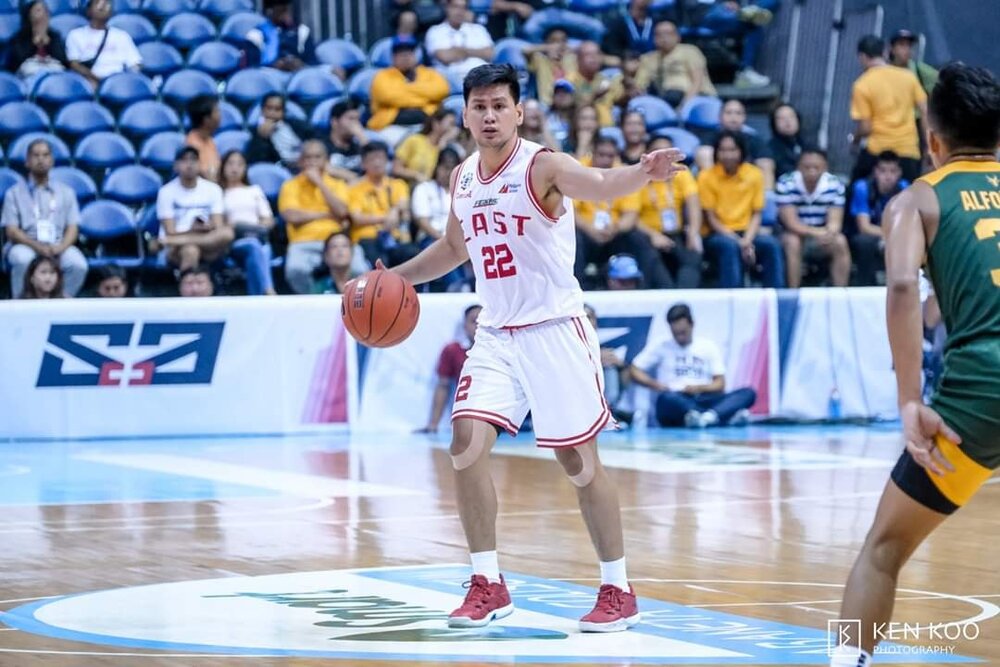 Jed is seen setting a play for the UE Red Warriors. (Photo by Ken Koo)

After his “done-and-one” stint at UE in 2019, Jed focused on preparing for an even bigger challenge: making the jump to the PBA. With the global lockdown brought upon by the COVID-19 pandemic, the PBA opted not to hold a rookie draft in 2020.

So as expected, there was an overwhelming collection of talent in this year’s draft class. A number of collegiate stars decided to forego their final playing year and tons of talented but virtually-unknown Filipino-American players applied for the draft.

However, Jed admitted that he had no choice but to try his luck, even in this loaded PBA draft class.

To make matters worse, the PBA decided not to hold a Draft Combine this year in an obvious effort to adhere to safety and health protocols. The draft combine is where the potential draftees gather to showcase their skills in front of a bevy of PBA scouts and coaches.

It could have been Jed’s golden opportunity to show to the coaches just how much he has improved. During the pandemic, he worked with a number of trainers to prepare for the draft combine. So without that event, Jed already knew at the back of his mind that his name would not be at the top of the teams’ draft targets.

Fast forward to the draft, Jed said that he and his family couldn’t be more tense, especially in the later rounds. As more of his peers’ names were called and with teams already not selecting players, Jed was already about to lose hope.

Just as when Jed was about to give up, the NorthPort Batang Pier called his name and he was selected as the 61st pick in the draft.

He was the last name to be called that night.

Jed received the news with mixed emotions because he knows the reality in the PBA. He knows that rookies drafted in the later rounds only have the slimmest of chances in signing a contract.

But Jed also knows that he can’t let that thought bring him down. He may be the last pick in the draft, but he is bent on writing his name in the history books.

As a fitting way to put a close to our meaningful conversation, Jed has a piece of advice for people out there who are chasing their dreams.

PrevPreviousLearn advanced dribbling techniques at Kenneth Mocon’s HOOP3XPERT basketball clinic
NextYukien Andrada: On His Mission to Bring the NCAA Trophy Back to the Red Lions’ DenNext