Home » Basketball News » NBA » Can the Lakers or the Heat get better by trading for DeMar DeRozan?

Can the Lakers or the Heat get better by trading for DeMar DeRozan?

DeMar DeRozan isn’t happy at San Antonio, and it won’t come as a surprise if he gets traded to a perennial contender like the Miami Heat, the Denver Nuggets or the Los Angeles Lakers. Two seasons into his stay with the San Antonio Spurs, DeMar DeRozan may be on his way out. Although it’s true that DeRozan has grown into a better passer and rebounder under head coach Gregg Popovich, he and the team haven’t achieved much collective success.

Before last season’s February trade deadline, numerous reports said that the Spurs already placed DeRozan and LaMarcus Aldridge on the trading block. Recently, The Athletic surveyed anonymous NBA agents, and one of them believes that DeRozan is still unhappy in San Antonio.

“DeMar doesn’t like San Antonio and doesn’t want to be there. If those guys leave, they land with Dwane Casey in Detroit. That relationship with the former coach is strong. Comes down to money (for VanVleet) and the situation in Toronto is rough with the taxes. VanVleet on the Pistons elevates his status as the number 1-2 guy on a team.”

— Anonymous NBA agent, via The Athletic

The Spurs are coming off a disappointing year, one in which they missed the playoffs for the first time since 1998. Rebuilding is already on the horizon for the franchise, paving the way for a possible DeRozan move.

The Larry O’Brien trophy may be back at Los Angeles, but the question is how long will it stay there? The Lakers are already linked to potentially acquiring Indiana Pacers star Victor Oladipo or Washington Wizards’ Bradley Beal. A deal for Beal may be a far cry, considering his very high value in the market.

Oladipo could be a better shot as his value dipped after a major injury he suffered in 2019. Looking into DeRozan could also be a realistic option for the Lakers, although they have to be willing to let go of Kyle Kuzma in the process. They also have to part ways with Danny Green to make the salaries match.

The Lakers could stagger DeRozan and LeBron James’ minutes so that either one of them is always on the floor. Green’s absence on defense would sting, but the brilliant playoff performance that Kentavious Caldwell-Pope just had could make up for that.

The Nuggets have a plethora of young assets to entice the Spurs, and that potential package starts with Gary Harris. Harris underperformed in the playoffs, but the 26-year old has the two-way skill set to make more improvements. Adding Michael Porter Jr. may be too much of a risk for Denver, so they could just put in Will Barton and a future first-round draft pick.

DeRozan will provide a proven scoring punch for the Nuggets, a dire need given the fact that Jamal Murray could become inconsistent at times. DeRozan needs to work more on his off-ball scoring to mesh with the playmaking of Nikola Jokic, but there’s no doubt that he will be fun to watch in Denver. 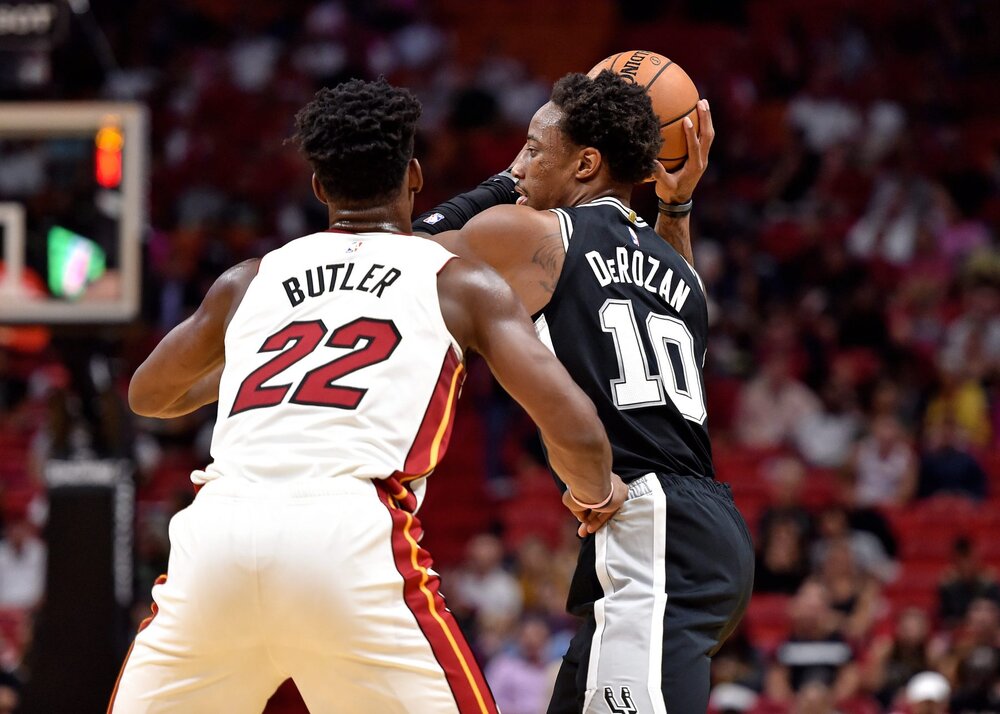 The Heat reportedly made a push for DeRozan before the trade deadline last season, and they could still be interested in his services. There were times during the Finals that the Heat struggled to get going on their offense, and DeRozan’s multi-dimensional scoring ability would be a big boost.

To match salaries, the Heat will have to ship the contracts of Andre Iguodala and probably Kelly Olynyk, then spice up the deal by adding a young asset in the form of Kendrick Nunn or Duncan Robinson.