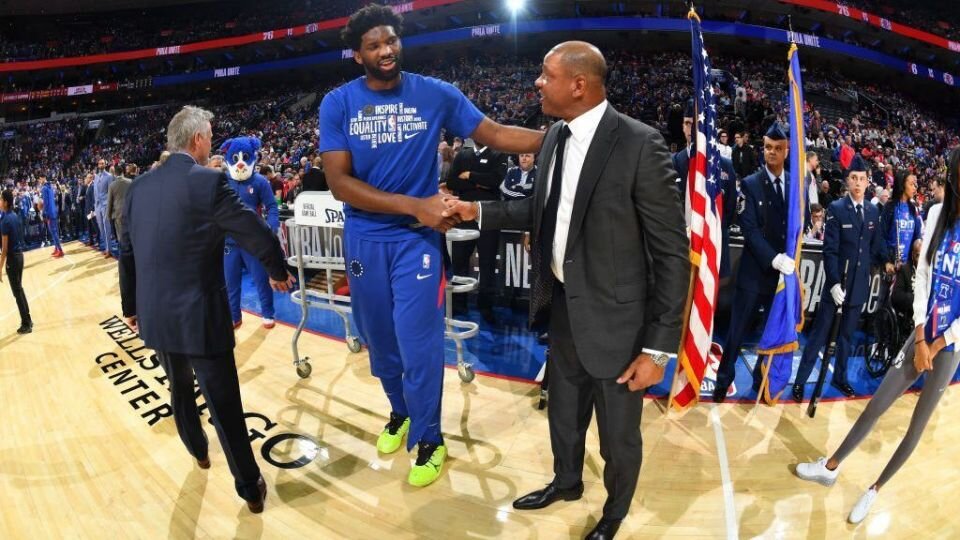 Doc Rivers and Joel Embiid will forge a partnership to bring the 76ers to greater heights. (Photo via Yahoo Sports)

The 76ers are bringing in former Los Angeles Clippers head coach Doc Rivers, an obvious effort to get the most out of their two young stars in Simmons and Embiid. Rivers is coming off a disappointing playoff exit with the Clippers, resulting to a break-up between the two parties.

ESPN’s Adrian Wojnarowski reported about this exciting development for Sixers fans, a move that could change their fortunes next season.

Rivers connected quickly with GM Elton Brand and Sixers ownership in Wednesday's meetings and sides moved quickly toward negotiating a multi-year deal that culminated with a formal agreement minutes ago, sources said. https://t.co/LCt5BhbkNX

This just comes days after Rivers officially parted ways with the Clippers, although he reiterated at that time that he will still pursue a coaching job in the NBA. With the Sixers also firing long-time head coach Brett Brown after their season ended, Rivers’ departure from Los Angeles couldn’t be any more timely.

Embiid, the team’s All-Star big man, approved of this hiring and tweeted out his welcome greetings for the seasoned basketball tactician.

Welcome to the city of Brotherly Love Coach @DocRivers !!!! Excited for the future and what we’re building here #PhillyForever

Wojnarowski would also point out that there is a possibility of Philly bringing in Alvin Gentry to serve as assistant coach for Rivers. Gentry was recently sacked by the New Orleans Pelicans, but he has already established an excellent image among the better coaches in the league.

Having said all these, it will be interesting to see how Rivers will influence the Sixers’ roster build-up for next season. The team’s front office has emphasized that they will not trade either Simmons or Embiid, but that they are open to moving other key cogs, which includes scoring forward Tobias Harris, veteran center Al Horford and young combo guard Josh Richardson.

PrevPreviousCarmelo Anthony: I called Kobe and MJ to teach me the Triangle Offense
Next2020 NBA Offseason: Potential three-team trade that will pair up Russell Westbrook and Devin BookerNext