Anthony Davis erupted for 37 points, while LeBron James added 15 as the Los Angeles Lakers took Game 1 of the Western Conference Finals against the Denver Nuggets, 126-114. 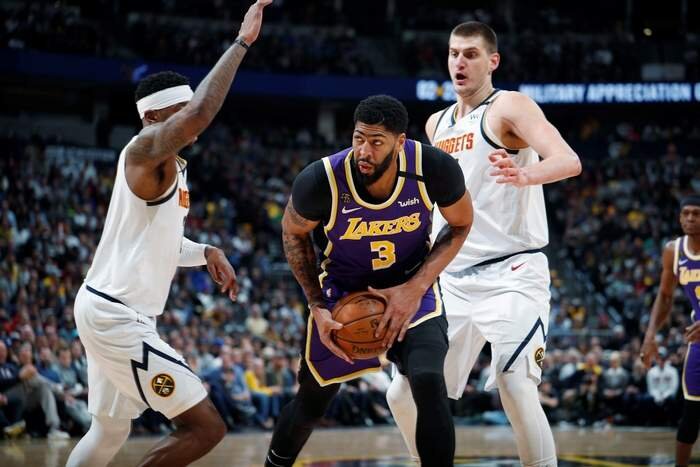 Anthony Davis powered the Lakers to take a 1-0 lead against the Nuggets. (Photo courtesy of David Zalubowski/Associated Press)

Davis did not show any sign of pressure in playing his first career conference finals game as the versatile big man also came up with 10 rebounds and 4 assists in the win. James had a near triple-double of 15 points, 6 rebounds, and 12 assists as the Lakers are now up 1-0 in the series.

After a spectacular Cinderella run during the first two rounds of the playoffs, the Nuggets are now down again in the series as the squad suffered a double-digit deficit defeat against the well-rested Lakers squad. Nikola Jokic had a solid offensive performance with 21 points, but was only limited to 2 assists as the Lakers were able to defend the passing lanes and cutters. The Serbian big man also got into foul trouble, picking up 3 quick fouls in the first half which made it hard for the passing-center to create plays for himself and his teammates.

Rising star Jamal Murray finished the game with 21 points, 1 rebound, and 5 assists in 58.3% field goal shooting. Despite the Canadian’s efficient shooting night, he was only limited to 12 attempts by the Lakers defenders all throughout the game, which was one of the main offensive struggles of the Nuggets in the Game 1 loss. Rookie Michael Porter Jr. had 14 points, 10 rebounds, 4 assists, and a steal but struggled badly as he only shot 33.3% from the field, converting only one of his six attempts from rainbow territory.

The Lakers big men in Howard and Javale McGee were reinserted back in the line-up after not playing in the series against the Houston Rockets. They did not disappoint. Aside from Davis, the gritty centers also made key defensive stops against Jokic, and provided rim protection for the Lakers. The Lakers also put on a scheme that put Jokic in foul trouble, containing the big man’s aggressiveness on both ends of the floor.

After the Nuggets took the lead at the end of the first quarter, 38-36, courtesy of Murray’s triple, Davis and the Lakers went on a 17-3 spurt in the second frame and even led by as many as 27 points in the second half. The Nuggets tried to pull off an early comeback, cutting the deficit from 15 down to a single digit, but were not able to keep the momentum.