LeBron James and Anthony Davis both put up 30-point performances as the Los Angeles Lakers take a commanding 2-0 lead over the Miami Heat. 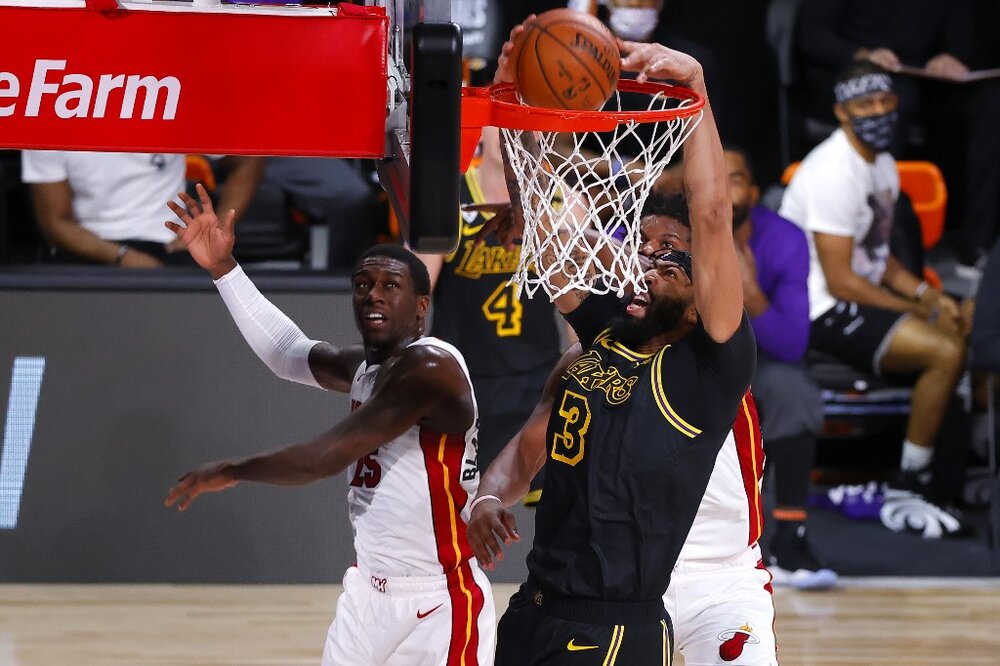 Winning an NBA championship, especially in the midst of a global pandemic, is a grueling marathon and not a sprint.

Compared to Game 1, Game 2 presented a different situation for the Los Angeles Lakers. Facing an undermanned yet undeterred Miami Heat squad, they needed to buckle down and hit big shots down the stretch to take a 124-114 victory and move within two wins from an NBA title.

“This [Miami Heat] team has a lot of fight and like I said, they’re extremely difficult to guard no matter who is in uniform,” Lakers head coach Frank Vogel mentioned in the post-game interview.

With the victory, the Lakers also remain undefeated when wearing the Black Mamba Jerseys in honor of the late Laker legend Kobe Bryant.

Anthony Davis continued his stellar finals run with 32 points and 14 rebounds, while LeBron James led all scorers with 33 points. The three-time champion was also a rebound and assist away from a triple-double. Rajon Rondo was also a difference-maker in the win, as he scored 16 points and dished out 10 assists.

Rondo double-double! @RajonRondo scores 16 PTS and hands out 10 AST off the @Lakers bench in the Game 2 W! #NBAFinals

“This is the finals, you know. There’s no extra motivation needed,” Rondo said after the game. “If you have to be motivated for a Game 3 in the finals then you probably wouldn’t be here.”

Jimmy Butler took on a more aggressive role in Game 2, finishing with 25 points, eight rebounds, and 13 assists. Kelly Olynyk came off the bench to score 24 points, while Tyler Herro added 17 in the loss.

Both teams pushed the pace and traded baskets early in the first quarter. The insertion of Herro and Myers Leonard helped spread the floor for the Heat and resulted in two quick 3-pointers from both. However, the Lakers responded by utilizing their size advantage and bullying their way to the basket, taking a 14-8 lead at the 7:41 mark thanks to an 8-0 run.

Dwight Howard was engaged early in the first quarter on both ends of the floor, as he was altering shots, scoring six early points, and even finding open cutters. Rondo also kept the ball moving with James on the bench, even converting on a 3-pointer to force the defense to respect him.

Both Butler and James had five points and four assists in the first quarter, but the latter’s squad maintained a 29-23 lead at the end of the opening quarter.

Butler also remained aggressive with his drives, getting his teammates open looks and drawing fouls against the Laker defense. Little by little, Miami was able to trim the deficit to four, with a Jae Crowder basket (off a Butler pass) bringing the score to 47-43 with 4:01 left before halftime.

BUCKETS had his ✋ on everything in the 1st half:

Los Angeles responded with their own run, closing the first half with a 21-11 run to take a 68-54 lead at the break. Rondo continued to push the pace and feed Davis and James the ball in spots where the Heat had no chance to contest.

The third quarter was all AD. Regardless of who was in front of him, Davis did not miss a shot until the 4:10 mark of the third quarter. From face up jump shots to contested drives to the basket, AD was unstoppable against the shorter Miami defense. He would eventually finish the quarter with 30, doubling his output in the first half. The rest of the Lakers followed suit, as they missed their first field goal (a Danny Green 3-point attempt) with 7:01 remaining in the third quarter.

The Heat remained unfazed by Davis’ offensive outburst, as they cut what was once an 18-point lead to just nine,100-91, with 48.8 seconds left before the fourth quarter. Olynyk was particularly instrumental in keeping Miami in the game as he had 16 points off three 3-pointers and drew a crucial offensive foul before the end of the third quarter.

AD’s offensive outburst was all the more crucial in keeping the Lakers on top considering that Miami won the third quarter, 39-35.

With the Heat slowly gaining momentum, James and Rondo tried to keep Los Angeles’ offensive rhythm flowing. After 3-pointers from Markieff Morris and Kyle Kuzma, the Lakers went scoreless for more than three minutes until a LeBron putback at the 5:58 mark of the fourth quarter.

Butler continued to be aggressive as he found Olynyk for an easy basket and helped draw multiple fouls on Los Angeles.

Both teams encountered some struggles in the latter portions of the fourth quarter, but James and Davis put the finishing touches down the stretch to earn the win.

Miami was the better three-point shooting team and went to the free throw line more, but the Lakers’ 44-37 rebounding advantage, 32 assists (to Miami’s 29), and 56 points in the paint were more impactful in this game.

Game 3 will be played on Sunday (Monday in Manila), with the Heat looking to avoid the 3-0 hole that no NBA team has ever come back from. Meanwhile, the Lakers will look to keep their foot on the pedal and move one step closer to their 17th NBA title.

“I love a lot of the things, the way we competed tonight but I think another level would have put us in a position to have an opportunity, you know, a real opportunity there at the end and that’s what you want.” Heat head coach Erik Spoelstra mentioned post-game. “And that’s part of the process of learning how to get to that next level.”