Without two of their best players, Jimmy Butler powered the depleted Miami Heat to a much-needed Game 3 win over LeBron James and the Los Angeles Lakers. 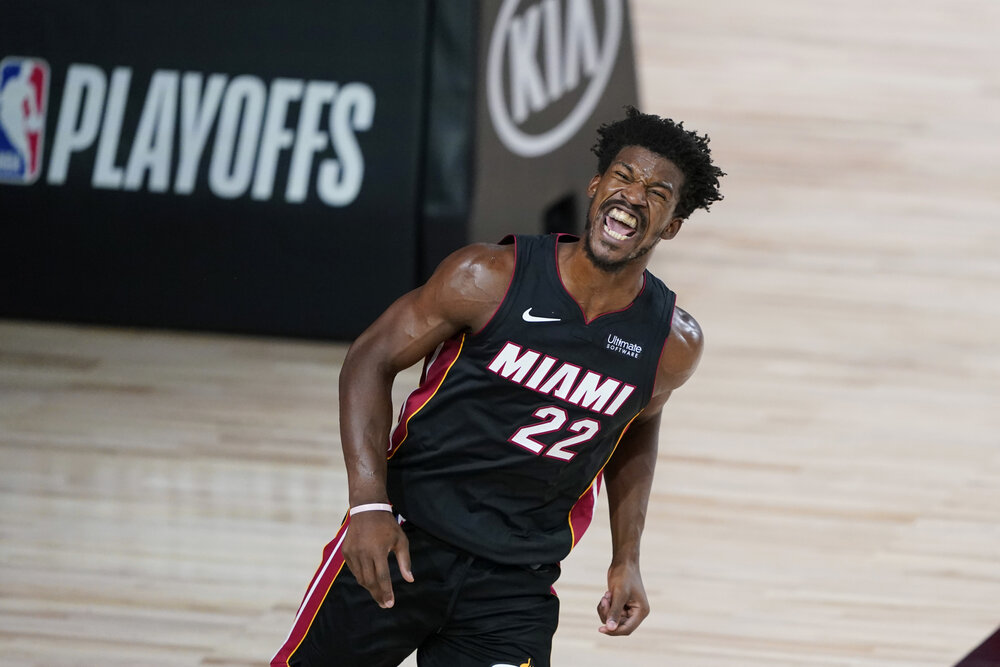 Butler poured in a 40-point triple double to push the Heat to a Game 3 win over the Lakers. (Photo via Getty Images)

Missing the services of key cogs Goran Dragic and Bam Adebayo, the Heat relied on Butler’s heroics to carve out a hard-earned 115-104 victory over the Lakers in Game 3 of the 2020 NBA Finals. Butler logged in 44 minutes, and finished with 40 points, 11 rebounds, 13 assists, 2 steals and 2 blocks.

The Heat started out rolling with an early 13-point lead in the first period, although the Lakers were able to cut it to three before the quarter ended. But it was obvious early on that the Heat ramped up their efforts defensively. It also helped that Lakers star Anthony Davis struggled to get going on offense and went into foul trouble in the first half.

The second half was a back-and-forth battle between the two squads, but it was Butler’s brilliance on both ends of the floor that spelled the W for Miami. He almost had a hand in every Heat bucket in the fourth quarter, either scoring the points himself or assisting for a teammate’s shot.

Butler’s off-the-board runner gave the Heat a 109-100 advantage with under a minute remaining on the clock. Tyler Herro then followed it up with an and-one conversion off a Rajon Rondo foul, and a Duncan Robinson corner trifecta sealed the deal for Miami.

“You in trouble.”
– Jimmy Butler pic.twitter.com/XdL2GagSFj

Kelly Olynyk again filled in nicely in Adebayo’s absence as he produced 17 points, 7 boards and 2 steals, while Herro tallied 17 markers as a starter. Robinson had 13, and veteran forward Jae Crowder finished with 12 points and 8 rebounds.

James led the charge for the Lakers with his 25 points, 10 rebounds and 8 assists, while Kyle Kuzma and Markieff Morris both came off the bench to chip in 19 markers apiece. Davis had 15 points in the loss, and only had nine field goal attempts the whole game.

The Lakers also have to avoid committing too much turnovers the next game. LeBron accounted for eight turnovers tonight, and Davis had five.

PrevPreviousFormer Lakers forward believes that Jimmy Butler is the most blue-collar superstar in the NBA
Next2020 NBA Finals: Jimmy Butler puts up a 40-point triple-dub to lead Top PerformersNext