The Houston Rockets banked on their star backcourt duo of Victor Oladipo and John Wall as they turned back Damian Lillard and the Portland Trail Blazers. 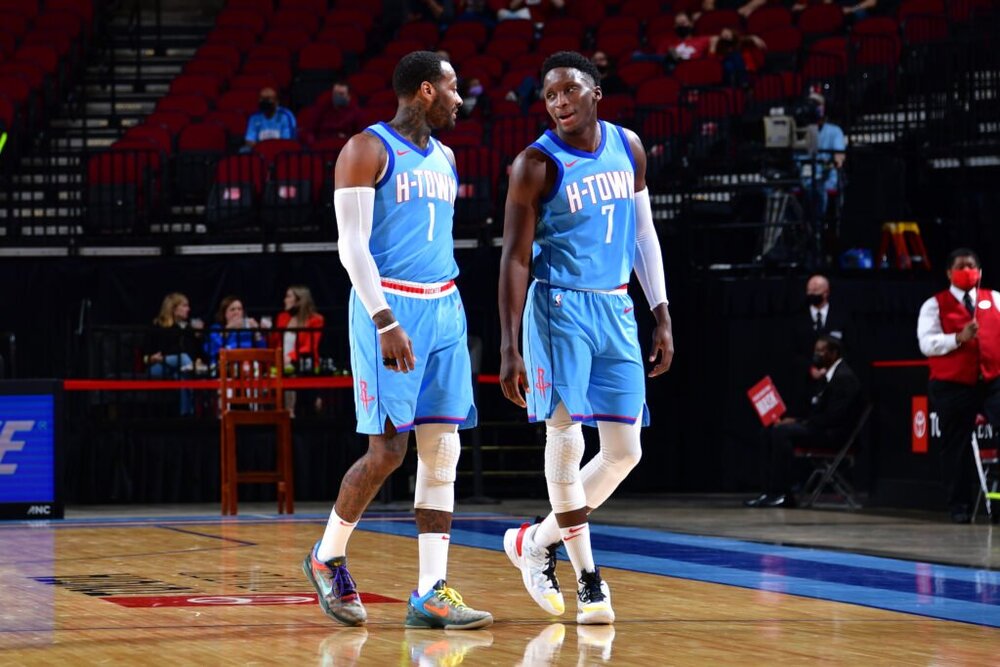 Wall and Oladipo combined for 45 in the Rockets’ win over the Blazers. (Photo by Cato Cataldo/NBAE/Getty Images)

The Houston Rockets are officially on a roll. Behind Victor Oladipo’s 25 points, the Rockets booked their fourth straight win as they defeated the Portland Trail Blazers, 104-101. Oladipo also added seven rebounds and five assists to his name, but what’s even more impressive was that he didn’t commit a single turnover the whole night.

It was another morale-boosting victory for the Rockets, who are still working on building their chemistry as a team. Only P.J. Tucker is the sole holdover from last year’s starting line-up, and Oladipo and John Wall are still getting acquainted with each other’s game.

But Rockets fans don’t have to worry about this as Oladipo assures everyone that each member of this team has “something to prove.”

"It's been great comin' to Houston. I feel like all of us are on the same page and we all have something to prove."

Victor Oladipo and the Rockets are motivated.

Wall also chipped in an all-around stat line of 20 points, 5 boards, and 6 dimes as he blazed through defenders, a sight reminiscent of his All-Star days in Washington. Christian Wood contributed a double-double outing of 22 points and 12 rebounds.

Meanwhile, the Blazers absorbed their second consecutive loss and their third defeat in the last four games. Damian Lillard topscored for Portland with 30 markers, but the absence of the injured CJ McCollum continues to be a massive loss for the team.

In arguably his most efficient game this season, Blake Griffin lifted the Detroit Pistons to a 107-92 upset win over the Los Angeles Lakers. The 31-year-old Griffin came through with 23 points and 6 assists and had zero turnovers. Griffin was in his bag the whole night, including this shimmy fadeaway jumper over LeBron James.

It was a close game through the first three quarters, but the Pistons clamped down on defense in the waning minutes of the payoff period. They held the Lakers to only 14 total points in the fourth quarter, sealing the victory to bounce back from a 15-point loss at the hands of the Cleveland Cavaliers last night.

LeBron and Kyle Kuzma both produced 22 markers for the Lakers, while sophomore wing Talen Horton-Tucker tallied 13 points off the bench. The Lakers, who are missing the services of Anthony Davis, has now lost two straight games.