Home » Basketball News » Podcast Previews » Tyler Herro: I leaned on Jimmy Butler so much during my rookie season

Tyler Herro: I leaned on Jimmy Butler so much during my rookie season

Miami Heat’s incoming sophomore guard Tyler Herro says that he relied on Jimmy Butler’s excellent leadership and mentorship throughout his first year in the NBA. 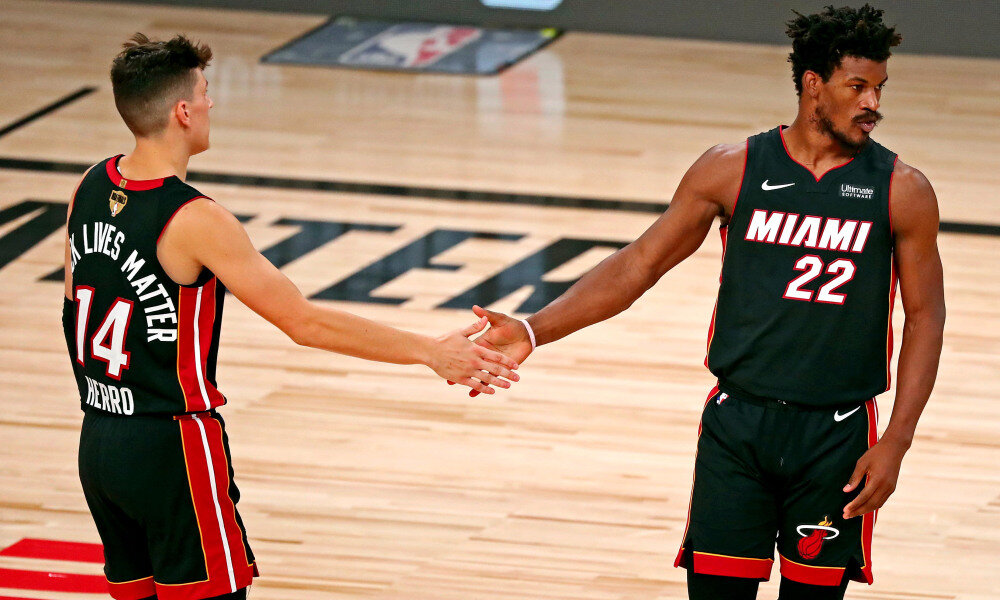 Jimmy Butler and Tyler Herro have formed quite a partnership in Miami. (Photo by Kim Klement/USA TODAY Sports)

During an appearance on The Old Man and the Three podcast hosted by Tommy Beer and New Orleans Pelicans veteran JJ Redick, Herro discussed his eventful rookie season in the NBA, including his close friendship with the 31-year old Jimmy Butler.

Even before last season, Butler already took the rookie under his wings, and that mentorship proved to be of great value for Herro and for the Heat. Herro, who averaged 13.5 points last year, says that he indeed lean on Butler’s leadership to help him get through the team’s inspired run to the Finals.

“I actually reached out to him (Butler) when we signed and traded for him,” Herro told Beer and Redick. “I leaned on him so much during my rookie year. and just being able to lean so much on him, who has seen everything and been through it all. We built such a great relationship.

I know he’s always been that guy that people talk about as being a bad teammate. But that’s a complete opposite of who he really is.”

Butler’s grit and no-nonsense approach to the game fit in perfectly with the strong culture that the Heat organization has. He was looked upon as a “toxic” presence in the locker room in the past, but the way that Butler led this Heat squad sort of redeemed who he really is as a teammate.

As for Herro, his growth will be an exciting sight to see in South Beach next season. Players in their second year in the pros often go through the “sophomore slump”, but Herro’s confidence in his game should help him overcome that hurdle.

Herro also admitted during the interview that he has patterned his game after fellow Kentucky Wildcat and now-Phoenix Suns star Devin Booker. Booker is coming off his first All-Star season, and is already one of the best all-around shooting guards in the league.

If you want to dive in deeper to Herro’s conversation with Beer and Redick on The Old Man and the Three podcast, just click on the Spotify link below.

PrevPreviousWho Got Better: John Wall to Houston, Russell Westbrook to Washington
NextAlex Caruso believes LeBron James could be a great coach in the futureNext