Behind back-to-back triples from stars Bradley Beal and Russell Westbrook, the Washington Wizards pulled off a stunning upset over Kevin Durant and the Brooklyn Nets. 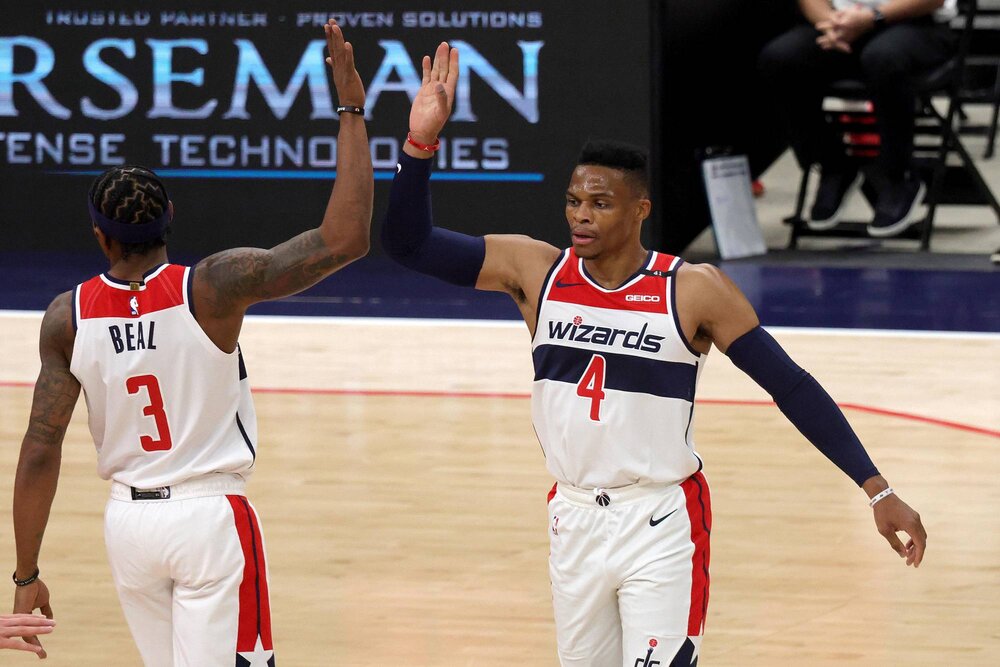 Beal and Westbrook combined for 78 in the Wizards’ win over the Nets. (Photo by Rob Carr/USA TODAY Sports)

Westbrook explodes for 41 in Wizards’ win

Behind the heroic exploits of their two stars, the Washington Wizards hacked out a morale-boosting 149-146 victory over the Brooklyn Nets. Russell Westbrook produced his best game as a Wizard as he put up a game-high 41 points, to go along with 10 rebounds, 8 assists, and 2 steals.

Bradley Beal, who has been rumored to be traded at some point of this season, chipped in 37 markers in the character-defining win. It was a high-scoring affair that saw the Wizards tally a massive 48-point fourth quarter to steal the win from the more-favorited Nets.

With only 11 seconds left on the game clock, the Wizards were still trailing by five points and were on the verge of absorbing their fifth straight loss. But Beal walked up to a pull-up triple to cut the deficit to two points. Nets forward Joe Harris then turned the ball over off the inbound, leading to a Westbrook left-wing trifecta that sealed the win for Washington.

It was just the win that the Wizards needed, especially with the tumultuous start that they had into this season. This victory improves them to a 4-12 record, although they are still sitting in the last spot in the Eastern Conference. It remains to be seen if Beal will be traded, but his body language in the first half of this game was quite the indicator of the things to come.

Kevin Durant led the charge for the Nets with his 37 points, while Harris contributed 30. Kyrie Irving scored 26 in the loss as the Nets gave up the chance to extend their winning streak to five games.

The Nets, who missed the services of James Harden due to a thigh contusion, had another lousy defensive performance. They gave up 50 points to the Wizards’ bench players, including 17 to Moritz Wagner, who came into the game just averaging 5.3 points per game.

Brooklyn’s 17 turnovers also haunted them in the end as those miscues led to 25 points for the Wizards.

PrevPreviousJJ Redick Sweepstakes: 76ers, Celtics, Knicks and Nets could chase veteran sharpshooter
NextNikola Jokic just put up 47 points, and no one is talking about itNext