Dribble Media offers an in-depth performance review of the Adidas Ultraboost 21, which was officially released by The Three Stripes last February 4. 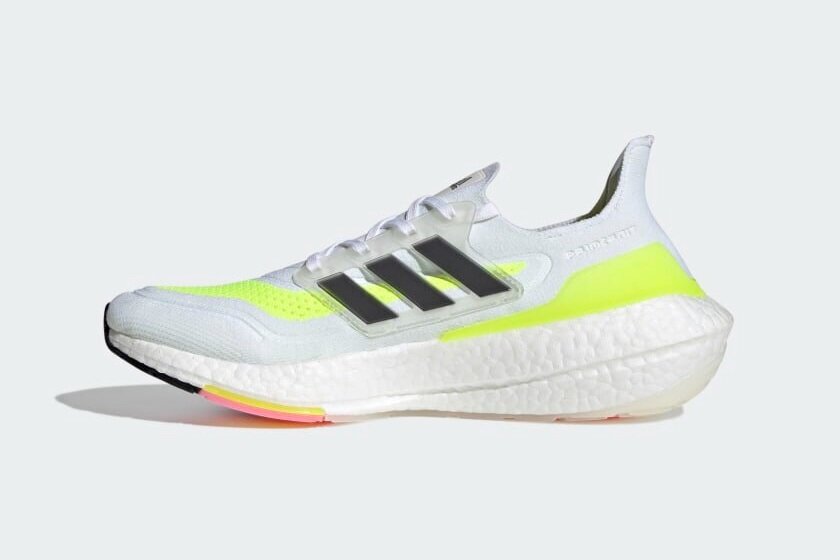 The Adidas Ultraboost 21 was released last February 4. (Photo via adidas.com.ph)

When did Adidas first introduce its Ultraboost line?

First introduced back in 2015, the Ultraboost series has taken the sneaker world by storm. It’s in a league of its own in terms of aesthetics, and that was in full display when famous rapper Kanye West flaunted the iconic “Triple White” colorway during the Billboard Music Awards in 2015.

Since then, the Adidas Ultraboost pairs have been widely-sought for their unique ability to offer two functions for their users. You can use the Ultraboost to bolster your morning runs, and then show it off when you visit the mall or just go for a quick afternoon stroll in the park.

With the high level of success that it garners every year, Adidas hasn’t stopped producing new iterations in the Ultraboost line. This year is no different as the Three Stripes rolled out the Ultraboost 21 last February 4, a rendition that is already producing mixed reviews from sneakerheads all over the globe.

Having said that, we wrote an in-depth performance review of the Adidas Ultraboost 21, and we started by scoping its materials. 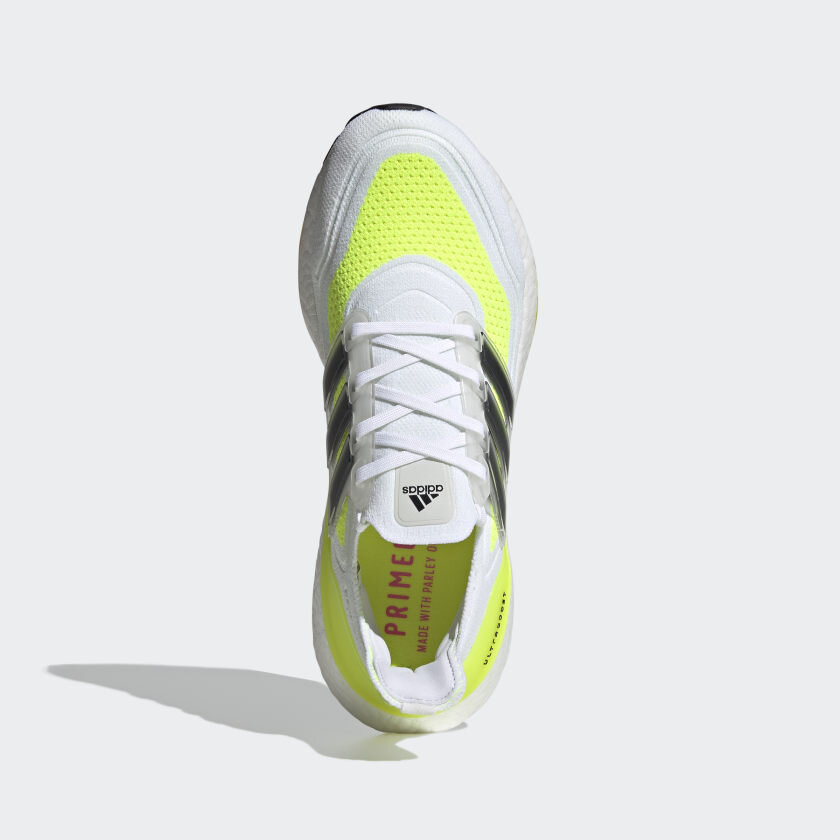 As highly-expected, the Primeknit uppers are back for the Ultraboost 21. After all, this is one of the signature features of the Ultraboost line. So thanks to the full-knitted fabric that Primeknit offers, you won’t have any problems with the comfort and breathability of this pair.

A portion of the upper is also utilized with the Primeblue yarn, a recycled material made with Parley Ocean Plastic. It is an innovation that Adidas combined with its advocacy for environmental sustainability. But even if the Ultraboost 21 uses a recycled material, its uppers are surprisingly softer and more flexible.

The Ultraboost 21’s Boost foam, which is the star of the show, is obviously thicker than the Ultraboost 20’s. We’ll discuss more about the thicker Boost in the Cushion and Support section of this review. 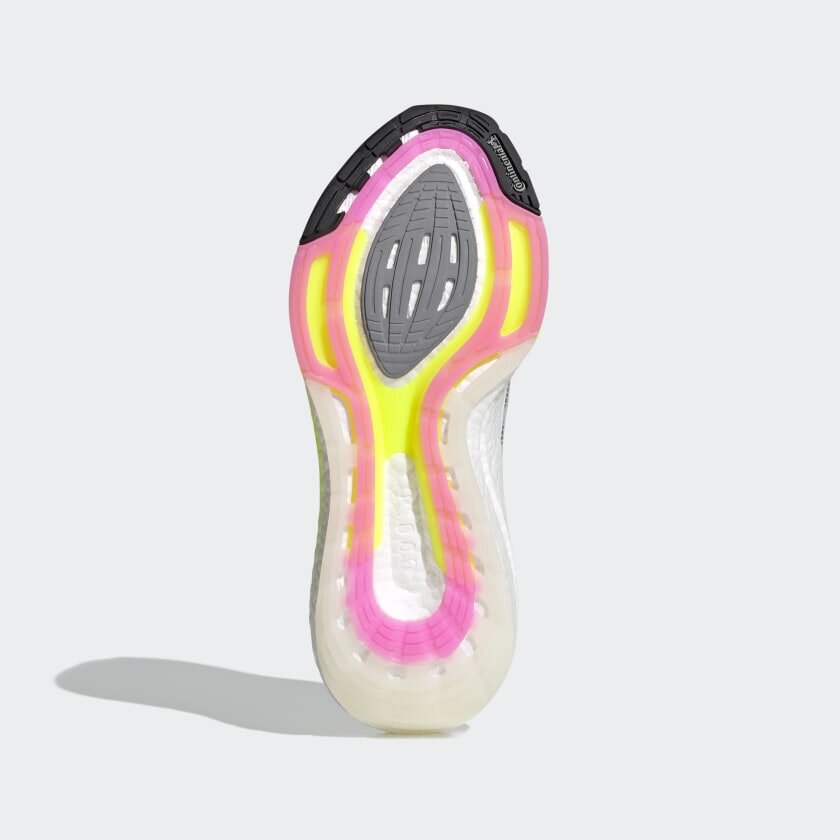 As you can see in the picture above, the outsole of the Ultraboost 21 is a bit shinier than most running shoes. That’s because it implemented a great deal of crystal rubber in the outsole. You can still see the more common Continental rubber at the top, but the crystal rubber takes a bigger portion of the outsole.

The advantage of the crystal rubber is that it greatly contributes to the durability of the outsole. You’ll eventually notice that even after a couple weeks of daily runs, the Ultraboost 21’s crystal rubber doesn’t wear out. Durability has always been one of the best features of the Adidas Ultraboost series, and that is true in this latest pair.

The downside of the crystal rubber outsole is that it doesn’t give you the topnotch bite that you want when you move quickly from side to side. However, this weakness in the outsole is crossed out by the high level of energy and responsiveness that the Boost foam provides. 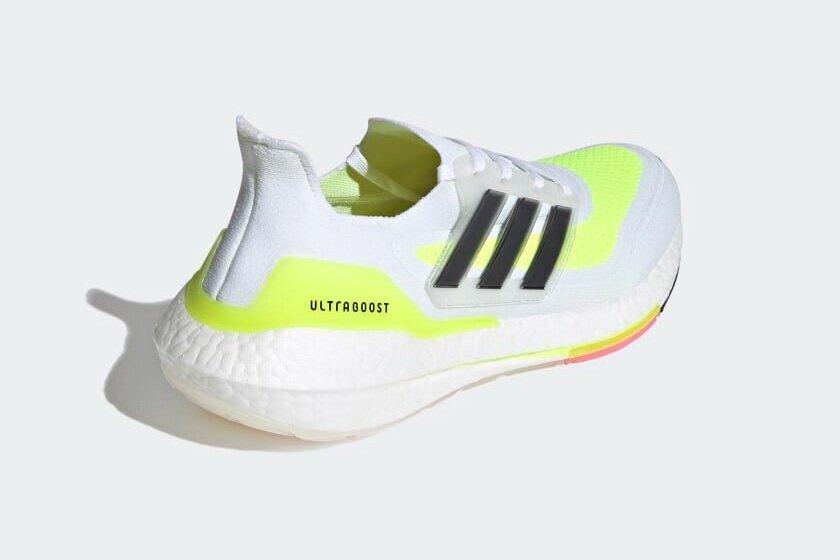 The Adidas Ultraboost 21 increased its Boost foam by 6%. (Photo via adidas.com.ph)

Of course, the most interesting part of this review is how well the Boost technology performs in this pair. As you can see even from afar, the Ultraboost 21 packs a Boost foam that is 6% bigger than its predecessor. This makes the Ultraboost 21 understandably heavier, so using it for long endurance runs could give your feet the fits.

But the positive takeaway is that the enhanced Boost foam provides you with increased energy and responsiveness. The energy return in the Ultraboost 21 is very bouncy and springy.

Furthermore, the redesigned Linear Energy Push (LEP) torsion system helps increase the responsiveness of the shoe. You can directly see the LEP system as the gray oval-shaped shank on the outsole of the Ultraboost 21. The Boost foam and the LEP system combine to create that springy-feel that will propel you forward on your runs. 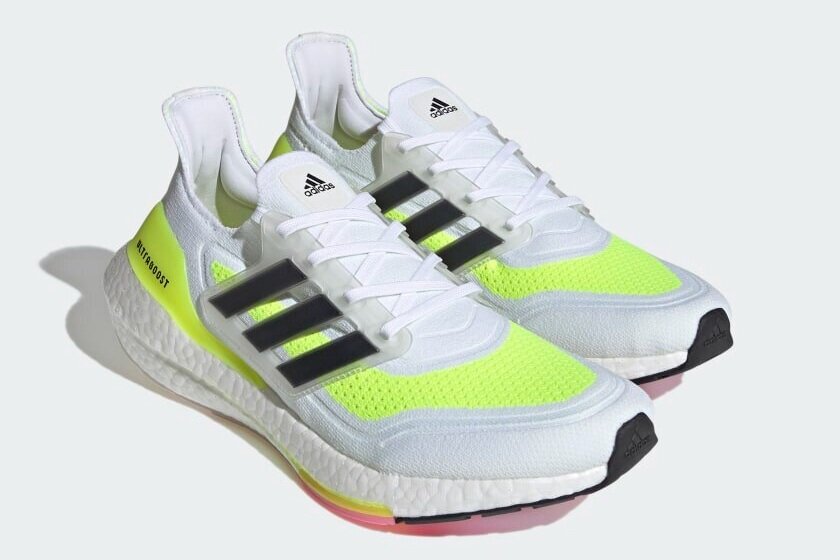 The Adidas Ultraboost 21 is a bit wide on the forefoot. (Photo via adidas.com.ph)

The Ultraboost 21 feels like it has a snug fit around the midfoot. This is quite a hassle as you put it on, but the positive takeaway is that it really helps in locking down your foot.

However, the Ultraboost 21 is actually a bit wide at the forefoot area. So if you have narrow feet, you might want to go up half a size.

The aesthetics will always be where the Ultraboost line will stand out, and Adidas did not disappoint on that part. The Ultraboost 21’s cool modern design makes this a crossover shoe where you can wear it for performance running and also for casual use.

The Ultraboost 21 could be one of the most durable running shoes in recent years, especially if you look at its well-built crystal rubber outsole. The inflated Boost foam provides a significant increase in energy and responsiveness, and the cushioning of the pair is surprisingly good.

But the drawback is that the Ultraboost 21 packs more weight than its predecessors. That would be a big problem if you want to use it for long runs or on an inclined trail.

Still, Adidas did an excellent job in threading the fine line between a performance shoe and a lifestyle shoe. You get the best (almost) of both worlds in this pair.

Having said all these, the Adidas Ultraboost 21 nets an overall rating of 4.5 out of 5 stars.

You can now buy the all-new Adidas Ultraboost 21 at selected Adidas stores for a price tag of US$180.