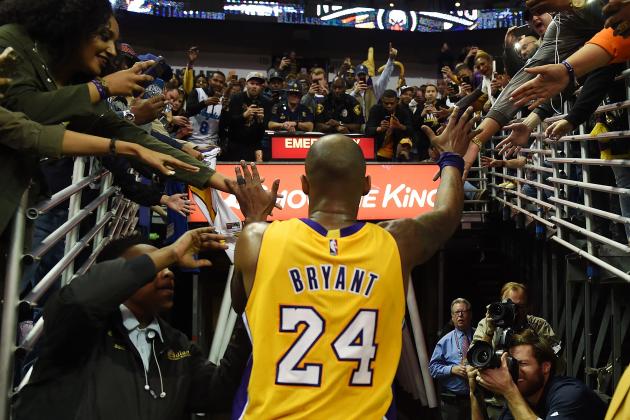 Kobe Bryant is primarily revered for amassing five championships with the Los Angeles Lakers, but the late great’s legacy was also highlighted for his tremendous work ethic and ferocious killer instinct. For 20 seasons, Bryant relentlessly bit the bullets and burned the candle at both ends until he achieved the endless feats that he accomplished.

There’s hardly any surprise that Bryant unconsciously paved the way for the next generation of players. As an athlete who possessed Hall of Fame skills on the floor and incredible charisma both on and off the hardwood, the 18-time All-Star influenced tons of stars from the modern era, such as Kyrie Irving, Devin Booker, and Jayson Tatum, to name a few. And even after his retirement in 2016, the Black Mamba’s game is still being recognized as a blueprint for millions of hoopers around the world.

But just like his immeasurable influence on the hardcourt, Kobe’s mad shoe game was just as contagious as his basketball game. During the 2020-21 NBA season, the Nike Kobe line dominated the league as the most worn shoe line with 114 players wearing it throughout the year.

Fans might think that the immense amount of Kobe users was caused by Bryant’s tragic death in 2020. But a look back at 2018 to 2020 shows that the Nike Kobe line was already at the peak of the charts with 78 and 103 users, respectively.

It’s really almost a no-brainer for a lot of players to choose the Kobes. With cutting-edge technologies, unique styles, and mouth-watering colorways, who would not want to grab a pair?

When Bryant jumped over to Nike’s backyard in 2003 after his partnership with his previous endorser ended miserably, Bryant’s sneakers were already set for stardom. For more than a decade, Nike released iconic colorways from the Kobe line, and some designs were even inspired by the important aspects of the 2008 MVP’s life.

In 2011, Nike introduced the Kobe 6 “Orange County prior to the NBA All-Star weekend held in Los Angeles, where Bryant won his 4th All-Star Game MVP trophy. The gradient orange silhouette of the pair was inspired by the location of Bryant’s residence, Orange County.

So when the Lakers legend succumbed to a helicopter crash a year ago, Orange County offered the greatest honor that they could give to Kobe, and Los Angeles declared August 24 as “Kobe Bryant Day”. August 24 resembles “8/24”, the jersey numbers Kobe used during his NBA career.

In light of that, let’s take a look back at the first and last sneakers Kobe used in an NBA game. 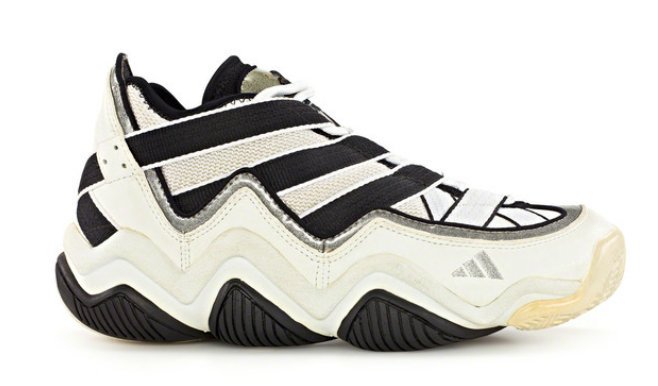 In 1996, Bryant — then just a 17-year-old kid from Lower Merion High School — was drafted by the Charlotte Hornets with their 13th overall pick. On draft day, he was shipped to the decorated Lakers franchise, and the rest was history.

Bryant made his debut on November 3, 1996 against the Minnesota Timberwolves, where he only played for six minutes and recorded a rebound and a block while wearing a custom pair of Adidas in size 14.

The sneaker, which turned out to be a customized Adidas EQT from 1996, was dressed in a simple black and white color blocking that went throughout the entirety of the pair.

After the game, the pair was obtained by a fan named Scott Hurlimann after he asked Bryant if he could have the shoe after the game. A few years later, the fan had another fateful encounter with Bryant outside the team’s hotel and asked the legend to sign the sneakers for him.

Kobe’s debut game sneakers were priced at US$100,000 as the starting bidding amount and are expected to be sold for around US$500,000. 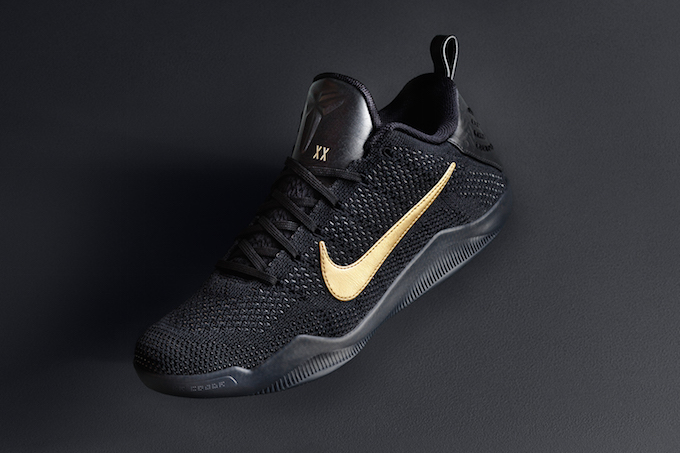 Bryant’s debut in the NBA wasn’t eye-popping, but his competitive spirit made him end his career with a resounding bang. The five-time champion made his last appearance on the hardwood on April 13, 2016 against the visiting Utah Jazz.

The Jazz were making a final push for a spot in the playoffs, but the tides just did not go their way. In his last game, Kobe went on to notch a historic 60 en route to a 101-96 victory after outscoring Utah by himself in the final frame, 23-21.

That night marked Kobe’s 1,346th regular season game. His season-long Farewell Tour came to a conclusion with him wearing the Nike Kobe 11 “Fade to Black”, a silhouette that is well-known among Kobe sneakers.

The pair appeared in black uppers with a gold Swoosh. The mark “XX”, which is the Roman numeral of “20”, appeared on the tongue and represented the number of seasons Kobe played in the NBA. Lastly, a gold “4.13.16” detailing appeared on the heel portion of the pair to mark the date of Kobe’s last game.