Explaining the Types of Sneaker Deals in the NBA 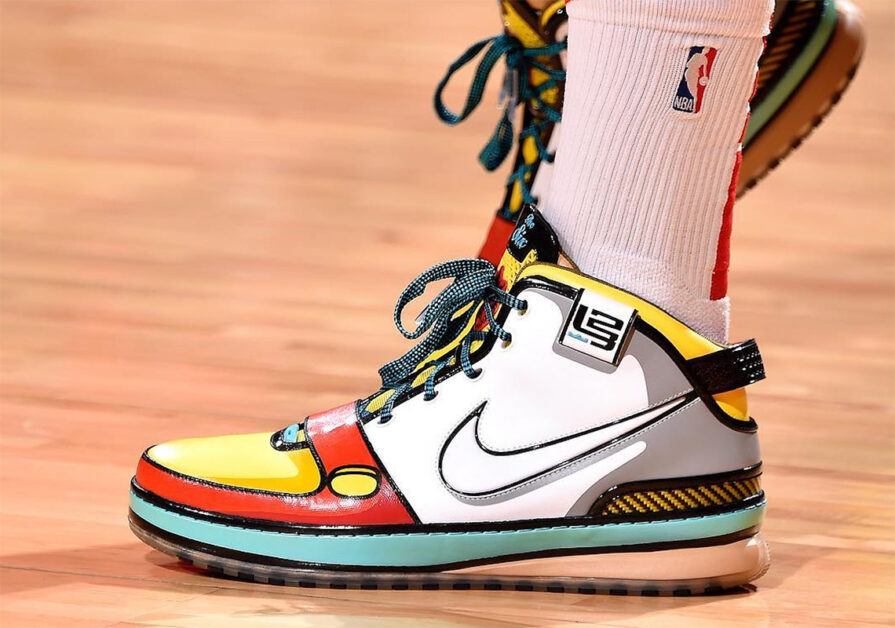 Aside from your usual blockbuster NBA news, sneaker deals are also now part of today’s biggest headlines in sports. Reports of which brand a prospect or a sneaker free agent would sign are finally making huge waves throughout the league.

Gone are the days where media outlets don’t care much about what shoe NBA stars would lace up for the season. After all, such deals took on bigger importance when sneaker brands started to build their own empires.

Known as the big three, Nike, adidas, and Under Armour are the most prominent brands in the league. Most of the biggest names in the NBA are signed with either one of these three.

However, other brands such as Puma, Anta, Li-ning and Peak, to name a few, are starting to catch up. These unheralded brands began to lure big names into their nest after staying with one of the big three at some point.

Sneaker deals are like signing with an NBA team: there must be something appealing that suitors have to offer. While the most common bait is the contract amount and royalties, there are also some other factors to consider when signing a sneaker deal.

Moreover, there is a hierarchy of contracts that sneaker companies look into whenever they are luring NBA players into their umbrella. With that being said, here are some known sneaker deals in the NBA.

Rookies are usually signed to a sneaker deal briefly after the NBA draft. The main reason is that sneaker companies would like to assess the potential signees by their draft order and the market they landed before inking them to a deal.

But in rare cases, players ink deals even before the draft, just like when the late great Kobe Bryant was signed by adidas in 1996.

However,  some prospects, like Damian Lillard in 2012, decide to hit the court first and establish their name in the league before deciding on what brand to lace up. While this is rather a risky move, it is not a bad gamble either, especially in the case of Lillard, who inked a lucrative deal with adidas shortly after.

Moreover, just like how skeptic teams are when calling a player’s name during the draft, sneaker companies are also critical when signing one. Brands also project the prospects’ potential career and marketability before betting their chips on them.

Therefore, rookies who land higher on the board or get drafted by bigger markets would probably be offered heftier contracts, which are typically four to five years long. So unless players turn into stars, getting a lucrative sneaker contract extension is somewhat improbable.

But to top all of these, sneaker brands, just like NBA teams, are bound to commit mistakes and make miscalculations with their projections.

In 2018, Puma signed several talents with oozing potential. Bannered by Deandre Ayton (No.1 Pick) and Marvin Bagley (No. 2 pick) along with some higher picked rookies, Kevin Knox (No. 9), Michael Porter Jr. (No. 14) and Zhaire Smith (No.16), it seemed like the German brand got the pot of gold at the end of the rainbow.

Just like NBA teams, players could land a sneaker deal through free agency. For the record, even the biggest names in the league went through sneaker free agency at some point.

During this time, sneaker companies are free to make their pitches while players can don any sneaker brand they desire during games. Though this sequence is more realistic for top-tier and mid-level players, minimum-level players could still strike a deal through free agency.

When signing minimum-level players, sneaker companies usually base on the commodity that these players can bring on the table. This is comparable to how teams are signing role players to fill their roster..

Moreover, the contract of the veteran deal would always vary depending on the caliber of the player getting signed. But normally, these players receive either cheaper cash deals or merchandise deals.

Moreover, big men commonly get merch deals due to the common belief that big men can’t sell shoes. That’s one of the major reasons why there are only a few bigs who have a signature pair despite their accolades and fame.

The most recent big man who got a signature pair was Sixers star Joel Embiid with the Under Armour. However, despite the intimidating on-court presence and exceptional skill set of Embiid, his sneakers could not make it on the top of the ladder.

But how does a merchandise deal work?

Players who are signed to such a deal do not have the perks of having a player exclusive sneaker, let alone a signature pair. However, they have the privilege of wearing the brand’s products during games.

In addition, they receive product allowance as well.

Normally, players are offered a US$25,000 contract. But of course, that amount is negotiable. These allowances are usually given as store credits for both physical store and online purchases. Basically, players could purchase any product that they please that could mount up to their contract’s provision.

What’s soothing about this contract is that the privileges are also good for sharing. That means, players with this type of deal have the freedom to use their credits to purchase products for other people. Talk about perks!

These products are not only limited to sneakers, but also to apparels of any category. Basically, they could obtain any product from toddler, GS, women and men sizes as long as they don’t go over the credit.

To make the deal even better, merch deals also come with performance incentives. Players could enjoy cash bonuses by winning the skills challenge during the All-Star weekend or getting the All-Star MVP.

As players progress both in prominence and role, merch deals could be attached with cash. Therefore, depending on their growth, minimum players could climb at least one deal higher.

But the question is, what would happen if players were not able to spend all their credits?

Each year, players only have until September 30 to utilize all their funds and the money doesn’t carry over to the following year. So as the deadline approaches, these players have to look for ways to spend all their credits.

Normally, they purchase for their friends and relatives, while some use their remaining credits to purchase giveaways for their organized summer camps or give back to their schools and AAU team.

Nonetheless, merch deals could be renewed annually and allowances could be re-negotiated.

This deal offers players a base salary, incentives, and product allowance that allows them to have the same privileges as those who are signed under merch deals.

Moreover, players signed under cash deals could earn approximately from US$200,000 to US$300,000 if they are categorized at the low-end, while mid-range or top-tier players could ink US$2 million to US$3 million contract.

While mid-range players are justifiable, it is quite mind-boggling why several top-tier players are only signed for a cash deal.

Top-tier players, which are classified as All-Star caliber, or at least marquee players with All-Star or even superstar potential are not granted with signature pairs as they are not deemed marketable enough to have one.

Do not forget that sneaker deals are part of the business. Therefore, brands would only invest in players who they project as marketable.

Instead, these top-tier players are granted player exclusive pairs. Meaning, though they do not have signature shoes, they have their own logo and customized colorways implemented on the sneakers they use.

Nonetheless, cash deal players could still be granted with a signature pair once they reach a certain status in the league. Therefore, players like Jayson Tatum, Bradley Beal, and Luka Doncic, to name a few, could have their own signature line once certain conditions are met.

Unfortunately, that doesn’t work for big men. Due to the same reason stated about their marketability, several superstar caliber players like Anthony Davis and Nikola Jokic remain only as top-tier cash deal players with player exclusive privileges.

Obviously, the signature deal is the sweetest among the sneaker deals. Who would not want to have their names written on the brand or a design built especially for them?

But along these gratifying reasons, signature deals come with a lucrative amount of cash. These deals are so massive that even some players could earn more from their sneaker deals than their NBA contract.

Apparently, the 2011 MVP Derrick Rose earned more from adidas than during his time with the Detroit Pistons, while former Los Angeles Lakers gunner Kyle Kuzma was also on the same boat with Puma during his stint with the Lakers.

While this could be a common scenario due to the turn of tides with players’ NBA contracts, this is somewhat rare only for superstar caliber players with massive contracts. Apparently, Lakers superstar LeBron James is set to earn more with his lifetime contract with Nike than his entire stint with the Cleveland Cavaliers.

Typically, players signed under signature deals have a base salary ranging from US$5 million to US$15 million. Of course, it could be higher depending on the marketability and prominence of the player.

But along with the million-dollar contract, signature deal calibers are also bound to hefty privileges and royalties. These players could enjoy a negotiable percentage of royalty that would determine their free merchandise from the brands.

Depending on the contract, players could also acquire various royalties such as the exclusive use of the brand’s private plane, organized basketball clinics, and other privileges.

Moreover, players with signature shoes are in constant communication with the brands to discuss their preferred inspirations, designs, and colorways, to name a few. Of course, brands would like to maintain a harmonious relationship with their endorsees so they would not force their way out of their contract.

Nonetheless, signature deals are becoming a common thing and other brands are becoming more willing to take a risk in giving players a signature line. Outside the big three, brands like Puma, Anta, and Peak, to name a few, are granting players left and right with signature pairs.

Some may think that this move by certain brands may taint the essence of the signature shoe line, but in reality it is a bold move that could either make or break them. Besides, this could also open opportunities to other players who are deemed not marketable for the brands where they came from.

In addition, several NBA stars opt not to sign with any sneaker deals so they would be free from any obligation of wearing just one brand. Former Wizards star Gilbert Arenas did this after parting ways with adidas in the 2010-11 season. Thereafter, Agent Zero was seen donning various brands, including designers like Dolce & Gabbana at one point.

PrevPreviousDM Kicks Review: Despite Lack of Cushion, Nike Giannis Immortality is a Steal
NextDM Kicks: Ranking The Best PBA Sneakers From Week 6Next